Three counties in California have announced they’re reopening segments of their economy in defiance of Gov. Gavin Newsom’s statewide restrictions on nonessential business, which were put in place to curb the spread of coronavirus.

The announcements, which came as anti-lockdown protests sprang up across the state this week, raise questions of how much Newsom can expect voluntary compliance with social distancing restrictions as unemployment skyrockets, cabin fever sets in for people stuck at home, and quarantine measures become increasingly politicized.

Modoc County was the first county to make the move. On Thursday it announced it would reopen many kinds of venues on Friday, including restaurants, bars, and churches. Modoc County is a small, rural, and conservative district on California’s border with Oregon — it has 9,600 residents and no confirmed cases of Covid-19 as of May 2.

There, some county officials framed their decision to disregard the statewide order as nothing more than the early adoption of future reopening plans — and they argued the fact they’ve seen no confirmed cases means the safeguards required in a place like Los Angeles aren’t needed in Modoc County.

“We’re not in this at all to defy anything. We align with the plans. We’re just at a different phase in this because of where we are and how we live,” Heather Hadwick, deputy director of Modoc County’s Office of Emergency Services, told Politico.

The county’s plan does call for some limited restrictions — for example, restaurants and bars are expected to cut maximum capacity by half, and officials recommend that people who are over the age of 65 or have underlying health conditions remain at home.

Since March 19, California has been under shelter-in-place orders which call for residents to stay at home. That order says only essential services such as grocery stores and pharmacies can remain open. (Restaurants can offer take-out and delivery.) On the state’s website, there is a section explaining how local orders should be seen in relation to the statewide order; the site simply notes, “This is a statewide order” — which suggests the directive is meant to override local orders.

Despite this, on Friday, two other counties — Sutter and Yuba — announced that they too will be reopening venues as of Monday.

“The purpose is to continue to mitigate the spread of the virus to the greatest extent possible while addressing the need to gradually reopen the economy in order to ensure vital services are resumed in a safe manner,” Phuong Luu, who serves as the health officer for the two adjacent counties, said in the news release.

Luu described the reopening as intending to comply with the state order, even though it blatantly diverges from it. The counties will allow restaurants, shopping malls, gyms, hair salons, tattoo parlors, and many other venues to reopen.

Unlike Modoc County, these counties have substantial populations (around 170,000 combined) and dozens of confirmed cases of Covid-19 as of May 2.

As Politico reports, state lawmakers in the region have praised the move. Assemblyman James Gallagher said “there is no longer any justification for [Newsom’s] executive order as it pertains to our communities,” and that he’s “optimistic that other counties will soon follow soon.”

It’s unclear what measures Newsom could or would take to enforce state orders. But what’s plain is that he’s coming under increasing pressure to relax his stay-at-home measures. And some people — particularly conservatives who are more skeptical of policies to curb the spread of coronavirus — are inclined to go rogue.

Protests are spreading in California

Some of that pressure is coming from areas of the state that have seen far greater confirmed Covid-19 case counts.

As in many other states across the US, small demonstrations protesting lockdown measures have surfaced across California in recent weeks. On Friday, those protests appeared to escalate, with demonstrations in San Francisco, Sacramento, San Diego, and Orange County’s Huntington Beach. City police estimated that nearly 3,000 people showed up at the Huntington Beach protest alone.

“I served in the army and fought tyrants and dictators overseas and this has gone too far,” a protester at Huntington Beach told the Los Angeles Times. “I didn’t do that to come back here and live under a tyrant in my own country.”

Thousands of people — many not wearing face masks — showed up at the state capitol in Sacramento to call for, among other things, an end to restrictions on business. Some of them held signs questioning whether coronavirus is real, and arguing against vaccines.

At a Friday news briefing, Newsom attempted to walk the line of acknowledging rising tension and anxiety without coming across as yielding to political pressure.

“We’re all impatient and we’re deeply anxious and deeply desirous to start to turn the page and turn the corner,” he said. “The data is starting to give us more confidence.”

He also suggested that the schedule for reopening he’s discussed earlier might be accelerating.

“We’re getting very close to making very meaningful augmentations to that stay-at-home order,” he said. “We said ‘weeks, not months’ about four or five days ago. I want to say ‘many days, not weeks.’ As long as we continue to be prudent and thoughtful in certain modifications, I think we’ll be making some announcements.” 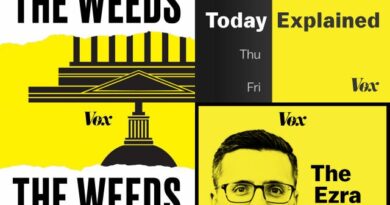 The 2020 Election on Spotify