The warm, inviting spring air coupled with vaccinations for Covid-19 are encouraging people to gather outside. But for allergy sufferers, that air is packing a massive wallop that could send them scrambling back indoors.

From Maine to Alabama, clouds of allergens like pollen are wafting over cities, leaving millions of people with watery eyes, headaches, and rashes. 2021 is shaping up to be yet another brutal year for allergies. Just like 2020, 2019, and 2018 …

The trend is real: Allergy risk is getting worse over time. The length and intensity of pollen seasons are growing, largely due to climate change. And as the planet continues to warm, more misery is in store.

Up to 50 million Americans are estimated to have allergies, and as pollen counts increase, more people may become allergic.

“I think that what will happen is that more people will get sensitized and then they will present themselves earlier because of the higher pollen count, particularly with tree pollen,” said Sunil Perera, an allergist in Roseville, California, near Sacramento.

That in turn will become a greater burden on health and the economy, as even people with mild symptoms struggle with remaining active and productive. The cost of treating nasal allergies already tops $3.4 billion per year in the US. Asthma attacks induced by pollen lead to 20,000 emergency room visits a year in the US.

One complication this year, like last, is the Covid-19 pandemic. Many are wondering whether their suffering is being caused by the virus or pollen. There are some overlapping symptoms between Covid-19 and allergies, like a runny nose and a loss of smell, but allergies also produce some distinct signs, like itchy eyes and sneezing, according to the American Academy of Allergy, Asthma, & Immunology. The more unique symptoms to Covid-19 include fever, cough, and shortness of breath.

However, many people with Covid-19 have no symptoms at all. And there’s no reason why someone couldn’t have Covid-19 and allergies at the same time.

In fact, doctors warn that severe allergies could make people more vulnerable to respiratory infections. “When allergic inflammation occurs in the respiratory tract, [infections] are easier,” Perera said. “We see concurrent allergies and infections when [patients] come see us.”

Face masks may provide allergy sufferers with some relief, although they leave eyes exposed. But as the planet continues to warm, allergy sufferers will have a harder time finding refuge. Grains of pollen range in size from 200 microns down to 10 microns, with smaller grains able to penetrate deeper into the lungs. Small pollen grains can even seep indoors. And researchers are finding out just how much our own insults to the environment are to blame.

Allergies are the result of the immune system overreacting to something that is otherwise benign. That can lead to annoying but mild symptoms like hives or itchy eyes. But it can also cause life-threatening complications like anaphylaxis, where blood pressure plummets and airways start swelling shut.

Pollen is one of the most common allergens. It’s produced as part of the reproductive cycle of plants. The timing of pollen production varies depending on the plant species, with trees peaking in the spring, grass over the summer, and ragweed in the fall.

“When CO2 goes up, plants tend to grow a little bigger,” said William Anderegg, an assistant professor of biology at the University of Utah. “They tend to put out more flowers as a fraction of their mass, and individual flowers tend to have actually more pollen on them.”

The other mechanism is the warming induced by carbon dioxide. Since it traps heat, higher concentrations of carbon dioxide in the atmosphere are causing the planet to heat up. This is leading to warmer winters and earlier springs, giving plants a head start on pollen production. “As spring heats up, all of these life cycle events, including pollen seasons, tend to shift earlier,” Anderegg said.

The combination of these two factors is leading to more pollen production and over a longer period of time.

Attribution is the growing climate science field that seeks to figure out not just how the climate is changing but also to what extent human activity is specifically to blame — and what amount of change might have occurred otherwise, without human meddling. Scientists use observations and models to figure out how phenomena ranging from extreme flooding to wildfires would be different if humans weren’t spewing gigatons of carbon dioxide into the atmosphere.

“Think of it as looking at a baseball player before and after they start using steroids,” said Lewis Ziska, an associate professor at the Mailman School of Public Health at Columbia University.

Researchers have now begun to attribute changes in allergens to human activity. In a study published in February in the Proceedings of the National Academy of Sciences of the United States of America, Ziska, Anderegg, and their colleagues calculated that human impacts on the climate account for roughly half of the increase in the length of pollen seasons in North America. Human-caused climate change also accounts for 8 percent of the observed increases in pollen concentrations.

“There is a very distinct climate signal that is appearing that we can directly associate with these changes in pollen, both with respect to load — how much pollen — but also with respect to the entire exposure time,” Ziska said.

These effects are already visible, and as humanity continues burning fossil fuels, these impacts are poised to grow. Some estimates show that pollen counts of all varieties will double by 2040 in some parts of the country, depending on what pathway the world takes on greenhouse gas emissions.

The northern latitudes will likely end up sneezing the most since they are the fastest warming parts of the planet. And pollen isn’t the only allergen of concern. As permafrost melts in places like Alaska, moisture is seeping into homes, creating an inviting habitat for mold. That mold can then produce spores that trigger allergies. Stinging insects are another concern in the far north. Warmer winters mean more insects survive into the spring, increasing their numbers. People who may not have realized they are allergic to stings can end up finding out the hard way that they are vulnerable.

Jeffrey Demain, director of the Allergy, Asthma, and Immunology Center of Alaska, told Vox in 2018 that he observed that the northernmost part of Alaska saw a 626 percent increase in insect bites and stings between 2004 and 2006 compared with the period between 1999 and 2001.

What’s emerging from the haze is that the health burden from allergies of all sorts is poised to grow, and there will be little relief for allergy sufferers on the horizon. But it also highlights how climate change impacts are already here, and they’re going to get worse. “This really underscores the urgency of reducing greenhouse gas emissions and tackling climate change as quickly as we can,” Anderegg said.

Why Covid-19 beat social distancing, lockdowns and “flatten the curve” 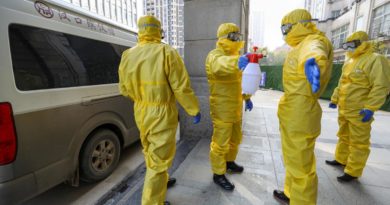 Climate change policy: How to do clean energy innovation right