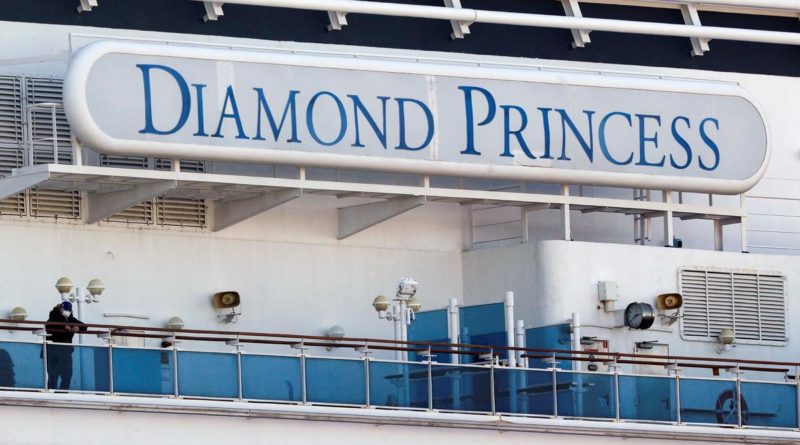 TOKYO (Reuters) – Another 70 people on board a quarantined cruise ship in Japan have tested positive for the coronavirus, bringing the total number of cases from the vessel to 355, Japanese health minister Katsunobu Kato said on Sunday.

The Diamond Princess, owned by Carnival Corp, has been quarantined since arriving in Yokohama, southwest of Tokyo, on Feb. 3, after a man who disembarked in Hong Kong before it traveled to Japan was diagnosed with the virus.

The ship, with some 3,700 passengers and crew on board, has the most coronavirus infections outside China. Those testing positive are transferred to Japanese hospitals.

No one from the ship has died of the virus.

“We must anticipate a spread of infections from now and must build medical system and so on to focus efforts to prevent people from becoming gravely ill or dying,” Kato said in a program on state broadcaster NHK.

“We will make the people feel at ease by providing information in a timely manner, and continue to forestall measures,” he said.

The United States, Canada and Hong Kong are sending aircraft to Japan to bring back their citizens on board the ship.

The U.S. Embassy in Tokyo said passengers and crew on board the ship were at high risk of exposure to the virus and it recommended that its citizens get off and take one of the flights home.

“This is a rapidly evolving situation and we are taking additional steps to assist U.S. citizens,” it said.

The embassy said all passengers would be screened before being allowed to board the chartered flights and everyone would be quarantined for 14 days upon arrival back in the United States.

“No symptomatic or infected passengers will be allowed to board,” it said.

Clyde Smith, 80, who was evacuated from the ship to a Tokyo hospital after testing positive for the virus told Reuters on Sunday he had not been told if would be allowed on a U.S. evacuation plane.

Hong Kong authorities said they were also sending chartered flights to bring Hong Kong residents and Canada has also chartered a plane to repatriate Canadians on the ship, its government said.

Latest figures from Beijing on Sunday showed 68,500 cases of the illness and 1,665 deaths, mostly in Hubei province.

FILE PHOTO: A passenger wearing a mask stands on the deck of the cruise ship Diamond Princess, as the vessel’s passengers continue to be tested for coronavirus, at Daikoku Pier Cruise Terminal in Yokohama, south of Tokyo, Japan February 13, 2020. REUTERS/Kim Kyung-Hoon/File Photo

Japan has had 53 cases of the coronavirus, apart from those on the ship, NHK reported, with one of only four deaths from the virus outside mainland China in Japan.

Hong Kong, the Philippines and France have all had single virus deaths.

The 10 Most Important Health Breakthroughs You Missed During the Pandemic