The conflict between Armenia and Azerbaijan escalated Wednesday, as both sides exchanged accusations and claims of new attacks over the separatist territory of Nagorno-Karabakh where heavy fighting continues for a third week despite a cease-fire deal.

In a statement compounding fears of a wider conflict, Armenian Defense Ministry claimed it reserves the right to target Azerbaijani military objects and troop movements. That followed an announcement by the Azerbaijani military that it destroyed an Armenian missile system “targeted … to inflict casualties among the peaceful population and to destroy civilian infrastructure.”

So far, Armenian officials have denied making any strikes on Azerbaijan from its territory, a claim contested by Azerbaijan. Openly challenging Azerbaijan militarily would raise the stakes in the decades-old conflict over Nagorno-Karabakh, which is inside Azerbaijan but has been under the control of ethnic Armenian forces backed by Armenia since the end of a separatist war in 1994.

Azerbaijan’s Defense Ministry said it didn’t have any military targets on Armenian soil and instead accused Armenia of trying “to expand the geography of a conflict.” Azerbaijani President Ilham Aliyev threatened “very heavy response,” should Armenia “carry out its plans to destroy” oil and gas pipelines in Azerbaijan.

Officials in Nagorno-Karabakh accused Azerbaijan of firing at a hospital in the region and called it “a war crime,” but didn’t elaborate on whether there were any casualties.

The recent fighting between Armenian and Azerbaijani forces erupted on Sept. 27 and marked the biggest escalation of the conflict. It has killed hundreds despite numerous calls for peace.

After more than 10 hours of marathon talks in Moscow, foreign ministers from Armenia and Azerbaijan signed a cease-fire deal that took effect Saturday.

Russia has a security pact with Armenia but also has cultivated warm ties with Azerbaijan, allowing it to be a mediator. It also co-chairs the so-called Minsk Group, set up by the Organization of Security and Cooperation in Europe in the 1990s to mediate the conflict, along with France and the United States, who also try to bring the warring parties to the negotiating table.

Immediately after the deal took effect, both Armenia and Azerbaijan accused each other of breaching it with continued attacks.

Azerbaijan has repeatedly criticized the Minsk Group for stalling the peace process and said its ally Turkey should be involved.

“What matters is for Turkey to be at this table. And it already is,” Aliyev said in an interview broadcast Wednesday, pointing out that he discussed the conflict over Nagorno-Karabakh with both the Russian and the Turkish presidents, and Russia’s defense minister has recently talked about it to the Turkish defense minister.

“Turkey is there (in the process of settling the conflict) and we will do our best to ensure that it continues to be there,” Aliyev said.

Erdogan spokesman Ibrahim Kalin said an in interview Tuesday that Ankara wouldn’t object to four-way peace talks involving Russia and Turkey as allies of Armenia and Azerbaijan. “The Minsk group is not able to produce a solution for the past 30 years. Are we to wait another 30 years? In this case we need to think of another mechanism,” Kalin said.

Turkey’s highly visible role in the conflict raised painful memories in Armenia, where an estimated 1.5 million died in massacres, deportations and forced marches that began in 1915. The event is widely viewed by historians as genocide, but Turkey denies that. 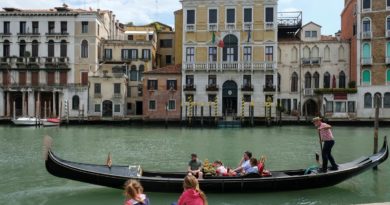 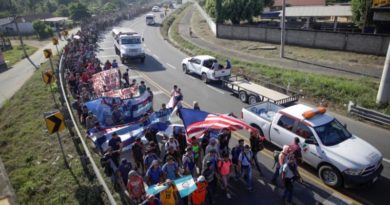 Caravan of hundreds of Central Americans moves into Mexico