At least 10 bodies have been taken to hospitals following a massive explosion in Beirut‘s port area, a Lebanese security source and a medical source told Reuters.

The capital was rocked by two massive explosions that flattened much of the port, damaging buildings and blowing out windows and doors.

Video footage of the blast showed a huge mushroom cloud rise above the capital.

Witnesses reported seeing several injured people being carried to hospitals on the back of motorcycles through neighbourhoods coated in shattered glass.

It is unclear what caused the explosion, but Lebanon’s state news agency NNA and two security sources said the blast had occurred in the port area where there are warehouses housing explosives.

Israel has confirmed that it had nothing to do with the blast, following speculation that the incident was caused by a missile, amid a recent flare-up in cross-border tensions between the two countries.

It comes at a time of significant economic and political upheaval for Lebanon, with the country facing the worst financial crisis in decades.

‘You can already see the consequences to US security’: Democrats react after Iraq vote to expel American troops following Trump attack 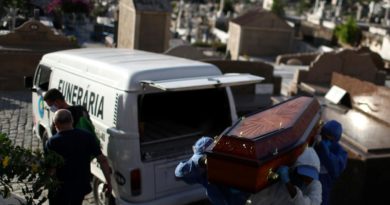 2020 election: A historian on the perils of chaotic White House transitions

President Donald Trump is still pretending he won the election. That’s embarrassing for him on a personal level, but there