Nick Torres, who medics had declared brain dead, was released from Texas Children’s Hospital on Tuesday afternoon and died at home around 5.15pm CT.

“The family surrounded the baby. They were praying,” Dr Joseph Varon told reporters. “Everyone was very respectful and praying”.

Dr Veron, a critical care doctor at Houston’s United Memorial Medical Center, said Nick had been at home for two hours before his heart stopped beating.

“Eventually, when I said he had flat-lined, I disconnected him from the respirator,” he added.

“They were very emotional. The last thing you want to see is your children go through this.”

Nick’s parents had been in a legal battle with Texas Children’s Hospital over its decision to take the child off life support.

Nick was admitted to intensive care after he was found unresponsive in a bath in Harris County on 24 September, according to court documents.

Six days later, medics at the hospital declared Nick brain dead and told his family he should be taken off life support.

But Nick’s family argued he should be kept on a ventilator while his heart was still beating.

“His heart is still beating, apparently his temperature is still being regulated by some part of his brain,” family attorney Kevin Acevedo said. “He may be unconscious but he’s not fully brain dead.”

The lawsuit was dismissed on Tuesday and the hospital agreed to release Nick back into the custody of his parents. 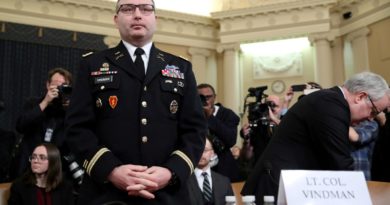 ‘OUT’: Trump says he was right to remove ‘insubordinate’ NSC aide