When Rick and Wendy de Pinho left Buenos Aires on March 7 onboard the Holland America Line cruise ship MS Zaandam, things felt “perfectly normal.” The New Jersey couple were concerned about the spread of coronavirus, they tell TIME, but at the time of their departure there were few confirmed cases in South America and the cruise line had assured them that steps were being taken to protect guests, including enhanced passenger screenings and increased cleaning protocol.

Three weeks later, however, and things are far from normal. Over the past month, COVID-19, the disease caused by novel coronavirus, has spread worldwide and been classified by the World Health Organization as a pandemic.

By March 13, every major cruise line had temporarily suspended its operations, leaving ships mid-voyage, like the Zaandam, scrambling to find ways to get passengers home. Multiple South American countries have since rejected the Zaandam‘s request to dock and allow passengers to disembark.

On Sunday, March 29, the U.S. Coast Guard released a safety bulletin that directed all foreign-flagged passenger vessels impacted by coronavirus — including cruise ships — carrying over 50 people to “increase their medical capabilities” in order to treat sick passengers for an “indefinite” period of time. “This is necessary as shore-side medical facilities may reach full capacity and lose the ability to accept and effectively treat additional critically-ill patients,” the guidance said.

The Coast Guard also told foreign-flagged ships “that loiter beyond U.S. territorial seas” to send severely ill passengers to the countries where the vessels are registered, before turning to the U.S..

According to NPR, registering ships in foreign countries is par for the course in the cruise industry; such registrations are a way companies can avoid some U.S. tax, environmental, and employment laws. In its bulletin, the Coast Guard specifically directed ships registered to the Bahamas — a country to which many cruise ships are registered — to seek medical assistance in the island nation before turning to medical facilities in the U.S. Per the Associated Press, however, hospital capacity in the Bahamas is still limited due to the destruction caused by last September’s Hurricane Dorian.

The Coast Guard’s guidance impacts the Seventh District Area of Responsibility, which includes Florida, Georgia, South Carolina and Puerto Rico. In the bulletin, the Coast Guard also said the move was partially to help “mitigate the potential of overwhelming local medical resources.”

Keep up to date with our daily coronavirus newsletter by clicking here.

The guidance also impacts the Zaandam, currently sailing towards Fort Lauderdale, Fla., where its voyage was originally scheduled to end on April 7. In a statement to TIME, the ship’s operator Holland America Line, confirmed that 73 guests and 116 crew members aboard on the Zaandam have reported “flu-like symptoms,” and that nine passengers have tested positive for COVID-19. Four passengers have died, Holland America adds. According to the AP, two of those deaths can be attributed to COVID-19. (Holland America Line said it could not provide additional medical details due to HIPPA laws.)

Rick and Wendy de Pinho, passengers aboard the virus-stricken Zaandam cruise ship, pictured during their transfer to the Rotterdam cruise ship on Sunday.

On March 28, 1,450 passengers and crew who had passed health screenings were transferred to another Holland America ship, the MS Rotterdam, in an attempt to lessen the load on the Zaandam’s crew. The de Pinhos were among the passengers transferred. (The Rotterdam is sailing alongside the Zaandam and also seeking port.)

Both ships are registered to the Netherlands, a spokesperson from Holland America Line tells TIME. More than 300 U.S. citizens are aboard them, per the AP.

On Wednesday, Florida Gov. Ron DeSantis said the state would accept Floridians who were aboard the Zaandam, but did not commit to taking people from other U.S. states or nationalities, per CNN. On Monday, DeSantis had faced criticism after telling Fox News that the state “cannot afford” to have coronavirus-stricken “foreigners” “dumped” into south Florida.

As of Wednesday afternoon Eastern Time, Florida had at least 6,741 confirmed cases of the virus and at least 85 confirmed deaths, according to a tracker from Johns Hopkins University.

In an op-ed published in the South Florida Sun Sentinel on Monday, Orlando Ashford, the president of Holland America Line, urged nations to not “turn their backs on thousands of people left floating at sea,” stressing that he fears “lives are at risk.”

“We have significant medical facilities and capabilities onboard our ships. However, there are rare situations when the medical needs exceed our onboard capabilities,” a spokesperson for Carnival Corp., the parent company of Holland America, tells TIME in a statement. “In those cases, we follow USCG guidance and direction regarding an evaluation of the patient and need to medically evacuate — and we will continue to do so. We value our relationship with the Coast Guard and we fully understand these are unprecedented times.”

A spokesperson for trade group the Cruise Lines International Association tells TIME in a statement that, “[We] are in conversations with the U.S. Coast Guard and other national and global authorities on an ongoing basis to achieve our mutual objectives—to do the right thing for people, passengers and crew. Since the cruise industry’s voluntary suspension of operations was announced, teams of people have been working day and night to coordinate a safe and orderly return to port for passengers and crew on the few remaining ships at sea, as well to do the right thing for crew that are supporting ships that are in full suspension.”

‘Without Empathy, Nothing Works.’ Chef José Andrés Wants to Feed the World Through the Pandemic

Celebrity chef José Andrés is focused on feeding Americans affected by coronavirus. Here’s how he plans to do it.

The Zaandam and Rotterdam are not the only cruise ships still sailing.

On Tuesday, Carnival Corp., which owns nine cruise lines including Holland America, Princess Cruises and Costa Cruises, told the U.S. Security and Exchange Commission that it had more than 6,000 passengers on ships still at sea, although only a portion of these vessels are headed to the U.S.

Princess Cruises’ Coral Princess is currently headed towards Fort Lauderdale, Fl., and has a “higher-than-normal” number of passengers with flu-like symptoms, per a March 31 statement from the cruise line. Guests aboard the ship are self-isolating in their rooms out of “an abundance of caution,” per the statement. The Coral Princess is registered to Bermuda, a Carnival Corp. spokesperson tells TIME.

“They need to allow the heathy people to go home… it’s been too long as it is and haven’t we learned anything from the Diamond Princess,” Rick de Pinho tells TIME in a Facebook message in response to to Coast Guard’s announcement. Passengers aboard the Diamond Princess cruise were forced to quarantine for weeks on the ship while it remained docked in Japan; more than 712 people eventually became infected with the virus and at least 10 people died, according to the U.S. Center for Disease Control and Prevention.

Emily Spinder Brazell, another passenger aboard the Rotterdam, tells TIME via Facebook Messenger that, “We feel like the ship is doing the best they can to take care of us but we feel like the governments of the world have been unwilling to help.” Brazell adds that she has been inspired by the Rotterdam‘s captain, who she says told passengers “he recognized that we are going through tough times but we are on a humanitarian mission.”

Rick de Pinho’s view of Zaandam on Monday night, taken from the Rotterdam.

“It’s been a rollercoaster… Are we able to dock? Are we not?” Wendy de Pinho tells TIME, adding that she and her husband regularly call other passengers aboard the ship to check in with them. “It’s the fear of the unknown. If you’re not already sick, this can really cause you to get sick.”

“I know it will be helpful for us to leave even though we’re leaving sick people behind because it will put less stress on the ship and crew,” Brazell wrote TIME in a Facebook message. “My heart will be in this with them until they’re all well and home.”

Still, it remains unclear when, and where, the passengers aboard these cruise ships will be allowed to disembark, let alone make it home.

Please send any tips, leads, and stories to virus@time.com.

Write to Madeleine Carlisle at madeleine.carlisle@time.com. 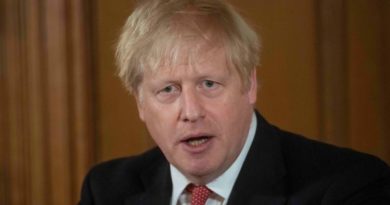 Britain’s NHS could be overwhelmed by coronavirus like Italy, PM Johnson warns

Coronavirus Can Live on Some Surfaces for Up to 3 Days: Tests