At the Stony Brook University Hospital in New York, two medical staff members confirmed ICUs built in response to the global coronavirus pandemic did not have anterooms, which are small, separate rooms within isolation areas used to remove personal protective equipment (PPE).

“We actually remove most of our PPE while still in patient rooms,” one nurse who works at the hospital said on Thursday: “That kind of freaks me out.”

Several doctors and nurses who have revealed seemingly unsafe working conditions and severe shortages of life-saving supplies at hospitals throughout New York have requested anonymity, fearing repercussions for sharing these issues with the public. The Independent is respecting these requests.

“It seems like every morning I show up for work, I find out that we have already filled up our current Covid ICU and that we’ve created a new one,” the nurse said, noting the first 20-bed ICU specifically for Covid patients was built just last week. “Since then, we have created 3 more ICUs dedicated to covid positive patients and we’re expecting to make more.”

They added: “I hate to say it, but we are pretty much just winging it at this point. We’ve pulled nurses and doctors from all over the hospital to staff the ICUs and it’s incredibly hectic up there … The other day we had orthopedic resident putting in orders on covid patients. These doctors don’t deal with patients with respiratory illnesses. They fix bones. It’s wild.”

A resident physician at Mount Sinai Hospital in New York meanwhile revealed doctors are being made to wear N95 masks “for days at a time” as “face shield and other forms of protective eyewear are also becoming scarce”.

“I think it’s near-impossible to predict how this is going to play out but we’re continuing to see exponential growth,” the doctor told The Independent, adding: “Many of the hospitals are at or approaching capacity.”

The medical staff at Stony Brook “believe they’re going to get sick at some point, it’s just a matter of time,” according to the nurse who works at the hospital.

“That’s how I feel. I’ve been in and out of those Covid isolation rooms so many times that I’ve just accepted that I’ll eventually get the virus,” they added. “I just hope I can work a while before that happens.”

Another nurse at the same hospital also shared those concerns, saying: “I wouldn’t say I’m worried, since it’s just kind of expected that we’ll get sick. I’m more worried about what happens if too many of us [medical staff] get coronavirus.”

Multiple medical professionals working on the front lines of the outbreak in New York — the state with more confirmed cases than anywhere in the country — have already contracted the novel virus, as state officials warn the local hospital system is nearing full capacity.

Kious Jordan Kelly, nursing manager at Mount sinai West, passed away on Tuesday after contracting Covid-19. He was 48.

The hospital confirmed his death in a statement, saying the facility was “taking every precaution possible to protect everyone” amid the outbreak.

Meanwhile. hospitals throughout New York and across the country have begun building out new ICUs to deal with the expected rise in nationwide Covid-19 cases. It remains unclear for now whether those ICUs will feature the anterooms hospital staff say are necessary to keep them safe during the pandemic.

One of the nurses at Stony Brook said they were about to begin using anaesthesia machines in place of ventilators as they continue to grapple with a severe shortage, noting: “I don’t believe many people even know how to operate those machines besides anaesthesiologists.”

“I want young people to know that they’re not immune to the coronavirus,” they added. “Not all young people are safe. People of all ages are susceptible to this horrible virus and are dying from it. People need to take this seriously.”

Brexit: A short history of the long road to the UK’s departure

Joe Biden issues emotional plea calling for an end to riots: ‘We are a nation enraged’ 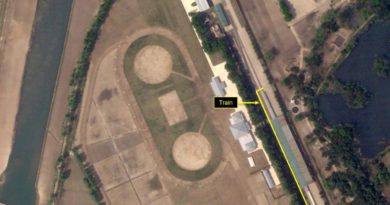 John Roberts was 26 years old, and he was outraged that he’d just been outmaneuvered by older and much more