The US government may have to call on retired doctors amidst other drastic measures to be able to cope with the “tremendous strain” of the coronavirus.

Hospitals are having to set up triage tents, guard supplies of face masks and make plans to cancel elective surgery as the pandemic worsens across the country.

“This is going to be a fairly tremendous strain on our health system,” warned Dr. William Jaquis, president of the American College of Emergency Physicians.

The number of cases of the virus in the US was recorded to be around 1,700 on Friday and the government has been forced to escalate its response.

In Michigan, if the outbreak continues to worsen, hip and knee replacement surgery and other operations that aren’t emergencies might be postponed.

Authorities in New York state and Illinois are talking about taking the same measures.

Government health authorities are taking emergency steps to waive certain laws and regulations to help hospitals be able to put measures in place to deal with the crisis.

In New York, mayor Bill de Blasio has announced a state of emergency in the city as the number of cases reaches more than 95.

Gov Andrew Cuomo announced that in the state the government will be taking measures to increase the workforce to cope with the virus including accelerating regulations to get nursing students certified to work more quickly and is asking retired doctors and nurses to offer their services.

Elsewhere, tents have been set up outside hospitals in Maine and Columbia to prevent suspected coronavirus patients from mingling with others in the ER.

In Seattle, the state hit by the nation’s biggest cluster of coronavirus deaths, UW Medicine set up drive-through testing in a hospital parking garage.

The drive through testing is completed by nurses reaching through car windows and using swabs to collect specimens from people’s nostrils.

It is not yet clear how bad US hospitals will be hit as the government is not wholly sure how many people have been infected due to a slow response in testing.

Experts fear that when the problems with testing are resolved a surge in patients will hit emergency rooms looking for treatment.

“What’s most important now is that we get the testing done,” said Richard Pollack, president of the American Hospital Association.

Additional reporting by the Associated Press 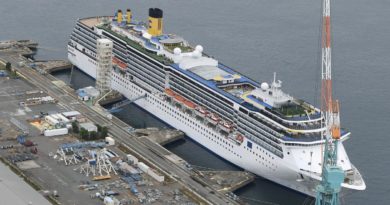