Spain has had one of the worst Covid-19 outbreaks in the world, which makes a recently completed antibody-testing study of the Spanish population so significant — and so scary.

Preliminary results from a well-designed survey of antibody presence among Spaniards suggest that even as the Spanish outbreak exploded and then was brought under control, only 5 percent of the country’s population has been infected with the coronavirus so far. This means that the vast majority of the Spanish population remains susceptible to infection if the lifting of restrictions there leads to a new spike in cases.

The message to the rest of the world is that as awful as the pandemic has been in Spain — where more than 27,000 people have died, a far higher per-capita death rate than in the US or even Italy — it’s not even close to an upper limit on how bad things can get.

When people talk about coronavirus testing, they usually mean a test to detect the presence of the virus in your body and to determine whether you need to isolate.

An antibody test, by contrast, checks to see whether your blood contains the antibodies that typically form when a person successfully fights off a case of Covid-19. A positive test means you likely already had the infection (perhaps without realizing it) and may have some degree of immunity to it.

Serology testing can be useful because people with Covid-19 antibodies could potentially socialize with each other at greatly reduced levels of risk. Also, people with antibodies could be good candidates for working at nursing homes and in other capacities that involve interacting with vulnerable populations.

Unfortunately, the science of Covid-19 immunity isn’t particularly clear at this point, so it’s difficult to react to antibody test results with much confidence.

Antibody testing, if done right, can also help us answer important research questions like: How lethal is this virus, really? When a new disease is first identified, it typically looks very deadly, as it’s known only on the basis of a handful of cases that were serious enough to warrant hospitalization. It often comes to light later that other people were sick, too (just not sick enough to be hospitalized), so the math changes. Because the coronavirus first started spreading during the winter cold-and-flu season, there have been questions about how many minor ailments might really have been the coronavirus, as well as how many truly non-symptomatic people may have been infected nonetheless.

The new Spanish survey (which is still underway) has a much higher-quality research design, and unfortunately, it has a much less reassuring result at this point: Only about 5 percent of people in the study have tested positive for Covid-19 antibodies, suggesting that just 5 percent of the Spanish population has had the coronavirus.

Even Spain is far from “herd immunity”

The study was carried out by the Carlos III Institute for Health and Spain’s National Statistics Institute, and thanks to that official backing, researchers were able to obtain samples from more than 36,000 randomly selected households across the country. (They tested nearly 70,000 people in total, meaning it’s a robust sample.) And precisely because the outbreak in Spain has been very bad, there was a much lower risk of the preliminary results being twisted by false positives.

This means that even if the news is good and people with antibodies have a strong and long-lasting form of protection against reinfection, “there is no herd immunity” in the Spanish population, according to the country’s health minister.

Cases in Spain have dropped dramatically over the past month, and the country is moving to lift some restrictions on activities (its lockdown orders were much stricter than anything that has been done anywhere in America). But the vast majority of the population remains vulnerable to new waves of outbreaks. Spain has had one of the worst Covid-19 outbreaks to afflict a sizable country, but there’s no reason to think things couldn’t get much worse elsewhere if a region has bad luck and bad policy.

Things could get much worse

That is the fundamentally sobering lesson for America.

The US’s case volumes and daily death tolls have fallen over the course of May, which has generated lots of talk of bent curves and peaks. But there’s no mechanical reason that caseloads can’t rise as people start to travel again, as businesses reopen, and as even basic precautions like wearing a mask become fodder for culture wars.

Spain has suffered more than double America’s per-capita death toll, but that’s based on just 5 percent of the population becoming infected. If the US reaches infection rates of 10-20 percent — to say nothing of the 60 percent threshold some scientists think is necessary for herd immunity to kick in — there will likely be many more deaths.

The Spanish data suggests about 1.15 percent of those who got infected in Spain ended up dying. Spain has a significantly older age profile than the US, so Americans might be better off. But the fact remains that if the virus fully blows through our population, the US could end up with millions of deaths — there’s no secret pool of hidden infections to indicate the virus is much less deadly than assumed.

But fundamentally, unless the United States finds a way to genuinely suppress the virus’s spread, the move to “reopen” the country runs the persistent risk of sparking a genuinely catastrophic outcome. The Spanish experience has been horrific, but the new data confirms that the worst-case scenario is much worse than what Spain has endured. 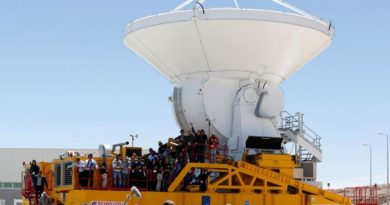 Chilean telescopes that explore galaxies brought down to earth by coronavirus

Trump coronavirus press conference: Despite dire warnings, the president wants everyone to “relax”