The entire 57-member Emergency Response Team of the Buffalo Police Department has resigned after two members of the unit were suspended for pushing a 75-year-old to the ground during the George Floyd protests.

The resignations were confirmed by the police union and two law enforcement that spoke to The Buffalo News.

Two members of the tactical unit, which responds to riots and crowd control, were suspended without pay on Thursday after video emerged of the confrontation during the emergency curfew.

The development that the members resigned “out of support for the suspended officers, as well as the disgust with the admin” was first reported by Spectrum News.

Buffalo Police Benevolent Association President John Evans said the officers were “simply doing their job” and the man “slipped” during the interaction, which was aired by local news WBFO on Thursday night.

The footage appeared to show the two offers pushing the senior man before he fell and hit his head on the sidewalk.

“Our position is these officers were simply following orders from Deputy Police Commissioner Joseph Gramaglia to clear the square,” Mr Evans told The Buffalo News.

“It doesn’t specify clear the square of men, 50 and under or 15 to 40. They were simply doing their job. I don’t know how much contact was made. He did slip in my estimation. He fell backwards.”

The mass resignation reportedly follows the union’s direction to members on Friday that they would no longer pay legal fees to defend officers from incidents stemming from the protests.

Buffalo Mayor Byron Brown issued a statement confirming “developments related to work assignments”, which reportedly sees the officers resigned from the tactical unit but not from the larger police department.

“At this time, we can confirm that contingency plans are in place to maintain police services and ensure public safety within our community,” Mr Brown said.

New York State Police confirmed that additional troopers were called into the region, including members of the Mobile Field Unit.

During the incident in the area near Buffalo City Hall, activist Martin Gugino can be seen in the footage to approach police before stumbling backwards and hitting his head on the pavement.

Blood pools on the concrete as police call it in on their radio and continue clearing the square. Hr was rushed to Erie County Medical Centre, where he was in a stable but serious condition.

Erie County Executive Mark Poloncarz said told a press conference on Friday that he was “utterly disgusted” by the officers’ decision to quit the tactical unit.

The Erie County District Attorney is investigating the incident but no charges have yet been filed. Mr Eveans said the police union would pay for any defence costs of the two officers.

“We stand behind those officers 100 per cent,” he said. 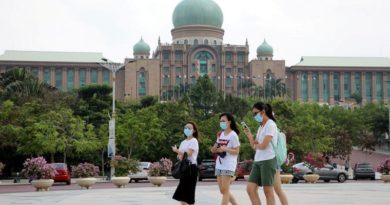