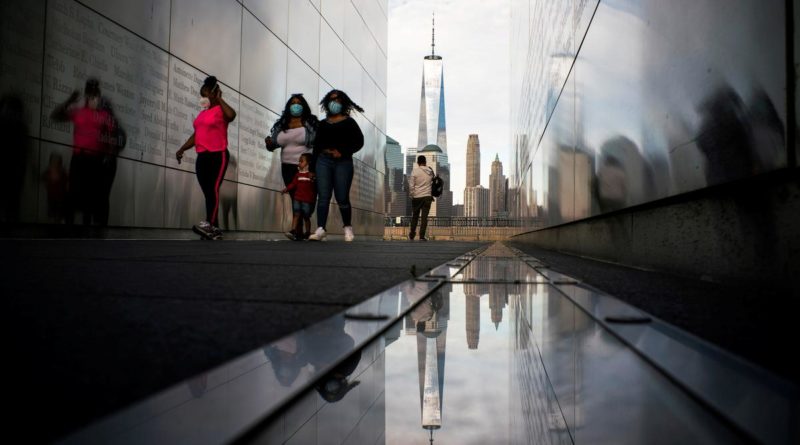 (Reuters) – More than 3.67 million people have been reported to be infected by the novel coronavirus globally and 255,848 have died, according to a Reuters tally, as of 0510 GMT on Wednesday.

FILE PHOTO: People visit the Empty Sky Memorial as the The One World Trade Center in New York is seen from Liberty State Park after many New Jersey Parks set to re-open during the outbreak of the coronavirus disease (COVID-19) in Jersey City, New Jersey, U.S., May 2, 2020. REUTERS/Eduardo Munoz

* For an interactive graphic tracking the global spread, open tmsnrt.rs/3aIRuz7 in an external browser.

* For a U.S.-focused tracker with state-by-state and county map, open tmsnrt.rs/2w7hX9T in an external browser.

* France reported more than 300 coronavirus-linked deaths for the second day running on Tuesday.

* The United Kingdom has overtaken Italy to report the highest official death toll from the new coronavirus in Europe, figures released on Tuesday showed.

* Spain reported its third day in a row of under 200 deaths.

* More than 1.21 million people in the United States have been infected and 71,130 have died, according to a Reuters tally, as of 0510 GMT on Wednesday.

* The White House coronavirus task force will wind down as the country moves into a second phase that focuses on the aftermath of the outbreak, U.S. President Donald Trump said. Separately, he urged China to be transparent about the origins of the virus.

* The U.S. economy could start to recover in the second half of the year after what is shaping up to be the worst recession in decades, but growth is likely to be slow and uneven, several top Federal Reserve policymakers indicated on Tuesday.

* Brazil said on Tuesday it recorded 6,935 new cases since Monday evening and 600 new deaths, while São Luis became Brazil’s first major city to begin a “lockdown” with another, Fortaleza, saying it would follow suit on Friday.

* The Development Bank of Latin America (CAF) will loan Argentina $4 billion to help finance projects to combat the growing economic impact of COVID-19.

* Mexico registered 1,120 new cases and 236 new deaths, bringing the total in the country to 26,025 cases and 2,507 deaths. Separately, its Foreign Minister Marcel Ebrard said the U.S. government has sent Mexico a plane loaded with ventilators.

* Hong Kong said it will relax restrictions on public gatherings and allow gyms, cinemas and beauty parlours to re-open this week.

* Authorities in Houthi-held north Yemen confirmed their first case, while the government in the south of the war-torn nation reported nine new infections.

* Tunisian banks have lent the government 1.2 billion dinars (around $410 million) in foreign currency to tackle the crisis.

* Palestinian President Mahmoud Abbas extended to June 5 a state of emergency declared in areas under his administration in the Israeli-occupied West Bank.

* Shares struggled and the yen gained, with markets in China faltering on their return from a long holiday as investors fretted over Sino-U.S. tensions, while oil ended an extended winning streak on oversupply risks amid weak demand.

* The U.S. trade deficit increased by the most in more than a year in March as a record drop in exports offset a shrinking import bill, suggesting the novel coronavirus outbreak was upending the global flow of goods and services.

* Slovenia’s GDP could fall this year by 15% or more if its lockdown lasts longer than now estimated.

* New Zealand’s jobless rate rose to 4.2% in the first quarter.