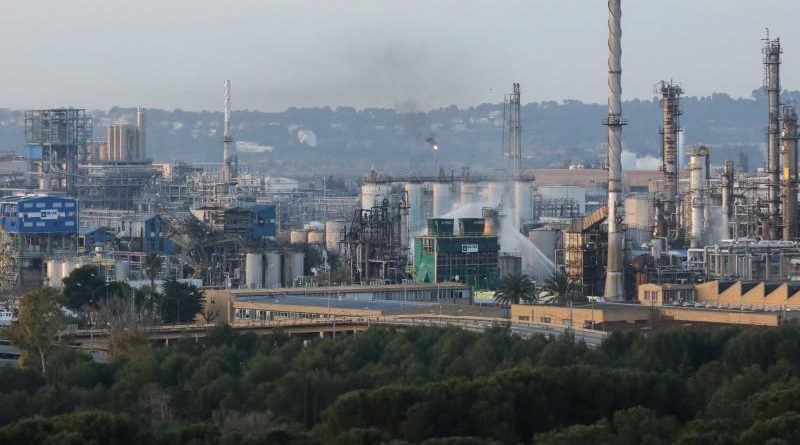 MADRID (Reuters) – A flying plate of metal may have killed a man some 2km away from the site of a huge chemical plant explosion in northeastern Spain when it was hurled out by the blast and crashed into his apartment building, local authorities said on Wednesday.

Firefighters spray water after a large fire broke out at the chemical factory, after explosion at a factory in Tarragona, Spain January 15, 2020. REUTERS/Nacho Doce

The explosion in Tarragona on Tuesday also killed a worker at the plant and injured eight others, the local authorities said, and sent flames and plumes of black smoke billowing for kilometers.

The large metal plate is believed to have been propelled into the third floor of an apartment block 2km away by the explosion, collapsing its floor and killing a man one floor below, the Tarragona authorities said in a statement.

They said they were still investigating the cause of the man’s death. He was the only person in the apartment at the time as his wife was out, the statement added, and there was no-one in the apartment above where the metal plate landed.

It’s “almost unbelievable,” Pau Ricoma, the mayor of Tarragona told news agency Efe, but added it was the “most likely hypothesis.”

Catalan police posted a photo of the metal plate on Twitter, saying it measured 122cm by 165cm and was three centimeters thick. They did not say how much it weighed.

Local authorities said on Twitter that the other person killed had been located but not identified yet: “There is structural risk in the area and work is being done to stabilize the area and safely reach the victim.”

The CEO of IQOXE, owned by Spain’s CL Grupo Industrial SA, said the company had opened an internal investigation into the explosion.

“We deeply regret the loss of one of our co-workers and the suffering of those who are injured,” José Luis Morlanes told reporters.

The explosion took place in a part the complex that had begun operations in June 2017 and had been operating normally, he added, prior to Tuesday’s explosion of a 20-tonne tank full of ethylene oxide.

Ramadan 2020 starts Thursday, April 23. The coronavirus is changing how Muslims plan to observe the holy month.