A video of a Turkish gamer has gone viral after he accidentally captured dramatic footage of his home shaking violently during the massive 7.0-magnitude earthquake which struck parts of the country on Friday.

At least four people are known to have died during the quake, with a further 120 injured, according to authorities.

Images from the Turkish city of Izmir shared online showed significant damage to buildings and also flooded streets, apparently the result of a small tsunami triggered by the tremors.

In the video, shared widely online, a teenager, using the handle of Falconn2k, can be seen streaming himself playing a video game on the popular platform Twitch while fans comment on screen.

Suddenly, the video begins to shake and the young man tears off his headphones and sprints shouting from the room.

As the camera continues to roll, the room begins to rock up and down and smashing noises can be heard as furniture and crockery elsewhere in the house off screen are thrown to the floor and torn apart by the quake. A dog can also be heard barking offscreen along with mingled shouts.

After about 30 seconds the tremors come to an end, almost as suddenly as they began.

Turkey’s Disaster and Emergency Management Presidency said the earthquake was centred in the Aegean Sea at a depth of 16.5 kilometres, although tremors were felt as far away as Istanbul (240 miles north) and Crete (200 miles south).

Trump claims he is ‘getting great marks’ for coronavirus response as US death toll nears 80,000 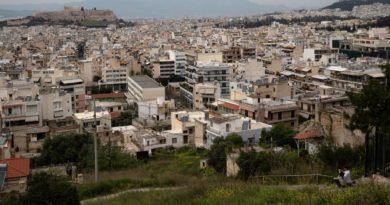