China has passed a controversial new national security law that increases its powers and police presence in Hong Kong.

The legislation, which represents the biggest shift in Hong Kong’s autonomous status since the city was returned to China by Britain, was approved unanimously at a meeting of the Chinese parliament’s Standing Committee on Tuesday, according to local media.

Hong Kong’s leader Carrie Lam said it was not appropriate to comment on the news while the Standing Committee meeting was still going on, but that once the law is passed “I and my senior officials will do our best to respond to everyone’s questions”.

Full details of the new law were expected to be announced in Chinese state media later in the day, but a draft document said it would ban subversive and secessionist activity, and allow Beijing to set up a national security office in Hong Kong for the first time.

Prominent Hong Kong activist Joshua Wong told reporters that the new law was “sweeping” and “ill-defined”, and that its passage “marks the end of Hong Kong that the world knew before”.

He and two other high-profile activists, Nathan Law and Agnes Chow, said they would be stepping down from their roles with the pro-democracy group Demosisto. Wong previously told The Independent that the new law would “kill future democratic movements” in the city.

Other opposition figures condemned the legislation. “We will never accept the passing of the law, even though it is so overpowering,” said Democratic Party chairman Wu Chi-wai.

A Reuters poll this month found that a majority in Hong Kong oppose the national security law, even as support for the broader protest movement has waned to only a slim majority.

The law appears to have been rushed through ahead of 1 July, the anniversary of the 1997 handover of the city and a date which has in recent years been marked by demonstrations.

At last year’s demonstration, which came amid the series of huge pro-democracy protests that began around a month earlier, a crowd stormed and vandalised the city’s Legislative Council building.

Wednesday may be an early test of how Hong Kong’s authorities will apply the new law, with opposition politician saying they would ignore the police’s refusal to grant permission for a rally. It was not immediately clear whether attending the unauthorised protest would now constitute a national security crime, if the law came into force by then.

A host of countries have expressed concerns over China’s recent moves in Hong Kong, including the US and former colonial power Britain.

On Tuesday, Japan said the new law was “regrettable” and undermined credibility in the “one country, two systems” principle whereby people in Hong Kong and Macau enjoy freedoms not experienced by citizens on the mainland.

Foreign minister Toshimitsu Motegi told reporters he shared the “deep concern” of the international community and the people of Hong Kong regarding the legislation.

Earlier this month, UK foreign secretary Dominic Raab urged China to step back from passing the new legislation, raising particular concerns at the “sobering prospect” of a provision that would require Hong Kong “to report back to Beijing on progress in pursuing national security education of its people”.

The law, he said, “raises the prospect of prosecution in Hong Kong for political crimes, which would undermine existing commitments to protect the rights and freedoms of the people of Hong Kong”.

He defended Britain’s right to comment on such matters as a party to the agreement by which Hong Kong was returned to China, saying other countries must hold Beijing to account for what would be “a clear violation of China’s international obligations”.

And he repeated Britain’s offer of citizenship to around 3 million of Hong Kong’s 7.5 million population who would qualify under the terms of the 1997 Joint Declaration.

Ahead of the announcement, the US government said on Monday it will bar defence exports to Hong Kong and will soon require licences for the sale of items to Hong Kong that have both civilian and military uses.

The Trump administration has warned for weeks that if the law was passed, it would take action to end Hong Kong’s special status for trade and commercial preferences.

“The United States is forced to take this action to protect US national security,” Secretary of State Mike Pompeo said in a statement.

“We can no longer distinguish between the export of controlled items to Hong Kong or to mainland China. We cannot risk these items falling into the hands of the People’s Liberation Army, whose primary purpose is to uphold the dictatorship of the [ruling Communist Party] by any means necessary.”

China has condemned such moves as interference in its internal affairs. On Monday, foreign ministry spokesperson Zhao Lijian said Beijing has decided to retaliate with visa restrictions on “US personnel who perform badly on Hong Kong related issues”. 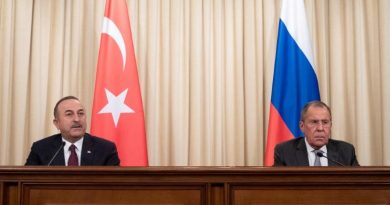