In his eulogy for Mr Floyd, Rev Christopher Stackhouse said that “although it took 8 minutes and 46 seconds for him to die, it took 401 years to put the system in place for nothing to happen”.

Demonstrations continued for a twelfth day on Saturday, leaving no state untouched, with nightly marches and vigils held in the nation’s major cities and in small towns in all 50 states.

City centres, state houses, streets and parks across the US were filled with hundreds of thousands of Americans, amassing unprecedented demonstrations for racial justice.

In New York, thousands of people converged in marches across the city, where peaceful demonstrations faced violent police as curfew neared over several restless nights.

Los Angeles saw more than a dozen demonstrations through the county, with thousands of protesters marching through Hollywood.

One march in Philadelphia, where gangs of bat-wielding white men have threatened protesters, stretched for more than a mile.

San Francisco’s Golden Gate Bridge was shut down to traffic in both directions as thousands of people made the trek across.

Chicago police reported that more than 30,000 people marched in the streets, where the names of black Americans killed by police were written onto city streets.

Massive yellow block letters spelling out Black Lives Matter – on the lips of thousands of demonstrators and across social media – were painted on two blocks of 16th Street in Washington DC, mere blocks from the White House, where black fencing was erected days after police fired tear gas into crowds while Donald Trump retreated further from protests and into social media.

Police expected as many as 200,000 protesters would participate in protests in the nation’s capital on Saturday.

Hundreds of National Guard service members were deployed in the city, where Mayor Muriel Bowser has lifted curfew and voiced her support for demonstrations.

Outside east and west coast city centres, demonstrations have not only amplified George Floyd’s name but also the names and stories of black Americans killed by police and the impacts of racial injustice within their own communities, whose stories aren’t as widely told, but whose pain speaks to the scale of the violence facing people of colour and indigenous communities.

Americans from Warren, Ohio to Topeka, Kansas, then north to Missoula, Montana, and among Great Plains states, spanned a diverse range of ages, races and ideologies, many staging their first protests and often led by young organisers and students.

Southern cities and towns, still dotted with symbols of white supremacy and the Lost Cause following the Confederacy’s defeat in the US Civil War, have also organised demonstrations and marches against police violence and racism.

Residents of the small town of Petal, Mississippi, have continued to call for their mayor’s resignation after he said on Twitter, “If you can talk, you can breathe.”

In New Orleans, where demonstrations have attracted hundreds of people nightly all week, Saturday’s march paused at the foot of the partially collapsed Hard Rock Hotel, where the bodies of at least two men of colour killed in the collapse have not yet been recovered.

But demonstrations against police brutality have often been met with more brutality, captured on video and prompting some officials to suspend officers and begin reforming their law enforcement departments.

Protests continued in Buffalo, New York, where two police officers were charged with assault after shoving an elderly man to the pavement during a demonstration this week, while dozens of officers left the force in protest.

Philadelphia district attorney Larry Krasner has charged a police staff inspector with aggravated assault for seriously injuring a protester after hitting him in the head with a baton.

Two New York Police Department officers were also suspended – one officer was filmed violently shoving a woman to the ground in Brooklyn and another pulled a protester’s mask down to shoot him with pepper spray.

Officials in Denver and Seattle have also banned the use of tear gas against peaceful demonstrators.

The incidents are among dozens others captured and shared widely on social media, as law enforcement ramps up threats against looters and property destruction.

Dozens of puppies on flight from Ukraine arrive in Canada dead

Coronavirus: US becomes first country to record more than 2,000 deaths in single day 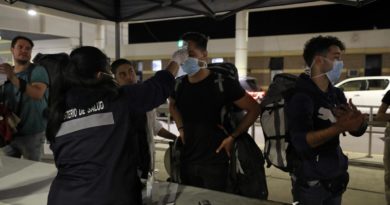