Rudy Giuliani said Sacha Baron Cohen is a “stone-cold liar” if he implies the image from the new Borat movie showed anything other than him simply “tucking in his shirt”.

The former mayor of New York responded after the on Twitter after the movie screenshot, that showed him lying on bed in front of an actress, went viral online.

“The Borat video is a complete fabrication. I was tucking in my shirt after taking off the recording equipment,” Mr Giuliani said.

“At no time before, during, or after the interview was I ever inappropriate. If Sacha Baron Cohen implies otherwise he is a stone-cold liar.”

Mr Giuliani, 76, was captured on hidden cameras set up in a hotel suite after actress Maria Bakalova, playing a fake conservative TV show host, invited him up to her room for a “drink”.

Her fictional father Borat, played by Baron Cohen, busts into the room shouting: “She’s 15. She’s too old for you” as part of the prank in Borat Subsequent Moviefilm, currently showing on Amazon Prime Video.

In his tweet thread in defence of the scene, Mr Giuliani said it was an effort to blunt his “relentless exposure of the criminality and depravity of Joe Biden and his entire family”.

“We are preparing much bigger dumps off of the hard drive from hell, of which Joe Biden will be unable to defend or hide from. I have the receipts,” he said.

Joe Biden called Mr Giuliani a “henchman” of Donald Trump was was leading a desperate, lastditch smear campaign against the Biden family.

Delaware Department of Justice confirmed to The Independent that it has referred to the Federal Bureau of Investigation the latest claims from Mr Giuliani that possible evidence of child endangerment was found on the laptop. 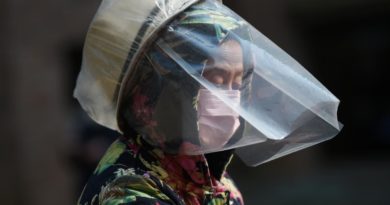 Amazon shooting: At least one person dead after shots fired at Florida warehouse