Kim Jong-un’s major heart surgery was remarkably detailed for the leader of a country hidden behind an opaque screen of secrecy. The operation apparently took place on 12 April at the Hyangsang clinic in Myohyang, which looks after the health of the ruling family. It was carried out by the best surgeon from the Kim man Yu Hospital in Pyongyang, who stayed to observe the recovery process for a week. The North Korean leader then went to a dacha at the Mount Kumgang resort for convalescence with 30 guards on constant watch.

Some of the information came from Daily NK, a newspaper based in Seoul focusing on North Korea. CNN then produced a report, citing US administration sources, that surgery had indeed taken place and Kim’s condition remained critical.

According to some officials in South Korea and China however, the rumours of Kim’s near death were much exaggerated. They had no information about a hospital stay, and, claimed that he was not in the mountains of Myohyang at all, but most likely at Wonsan, beside the sea. One official said that “nothing unusual” has been seen in the activities of the leader.

The last assertion can be questioned. For the first time as the head of state – the title of Chairman of State Affairs Commission – Kim had failed to take part in the annual flower laying ceremony on 15 April to commemorate the birthday of his grandfather and the dynasty’s founder, Kim Il-sung, at the Kumsusan Palace, one of the most auspicious dates in the state’s official calendar.

Kim Il-sung had died from a heart attack as had his son and heir Kim Jong-il. Heart conditions can be hereditary and Kim Jong-un is said to weigh around 136kg (300 lbs) at 5ft 7ins and is a chain smoker. No South Korean or Chinese officials, it should be noted, have actually denied that he has had a heart attack. What they say is that they have no evidence that his life is in danger.

The last supposed public appearance of the leader was on 11 April when he took part in a meeting of the extended politburo of the Central Committee of the Workers party of Korea, in Pyongyang.  This would indicate that there was a sharp deterioration of health for the operation to have been carried out the following day.

Kim has not appeared in public since and the scenario has echoes of 2008 when there were also reports of a serious health issue. He appeared unwell when he eventually surfaced, and evidence emerged later to indicate that he had suffered a stroke. In 2014 the leader dropped out of sight for six weeks before emerging with a cane. South Korea’s intelligence agency said he had an operation to remove a cyst from his ankle.

Pictures from the politburo meeting showed hundreds of members sitting in close proximity, leading to claims that Kim Jong-un had suffered not a heart attack, but coronavirus. North Korea has said it has tested 700 people for the disease and put more than 500 in quarantine. But, it has insisted to the World Health Organisation (WHO) that it has no cases of infection.

What happened at the politburo has added to the political speculation around Kim’s supposed ill health. The leader used the meeting to carry out a reshuffle of the State Affairs Commission, replacing five of its 13 members. Among those to lose their posts were two influential figures, former foreign minister Ri Su Yong and diplomat Ri Yong Ho. The former army commander and new foreign minister, Ri Son Gwon, was brought into the committee.

There is also a lot of conjecture about the role of Kim Yo-jong, the leader’s sister. She would be the obvious stand-in if he were to be incapacitated for a period. Not only is she from the “Paektu blood line” of the Kim dynasty; she has emerged as the most important member of the regime after him.

Yo-jong was recently reinstated to the politburo. This was an important comeback for her after her star had temporarily fallen due to Kim Jong-un being unsatisfied with what was gained from the summits with Donald Trump. Yo-jong is said to have helped persuade him to pursue detente after the two leaders had spent months hurling insults at each other and accompanied him to the meetings in Singapore and Hanoi.

Yo-jong has also been reconfirmed in her post of first vice-director of the Propaganda and Agitation Department. Last month she made well publicised incursions back into public life, praising Trump for sending Kim a letter pledging to maintain bilateral relations and offering any help needed with coronavirus. She also attacked South Korea as a “frightened dog barking” after Seoul complained about the North resuming missile testing.

Last December Yo-jong issued her first military order, sent to the army’s all-female units. There have been a spate of photographs showing brother and sister inspecting institutions and factories together and riding white horses at Mount Paektu, the sacred birthplace of the nation.

The US Treasury placed Yo-jong under sanctions three years ago “in response to the regime’s ongoing and serious human rights abuses and censorship activities”. Western intelligence agencies also claim that she is a senior member of a government department which overseas illicit activities to raise foreign reserves including counterfeiting, cybertheft, drugs and arms sales.

However, if Kim Jong-un’s health problems do turn out to be true, then it is Kim Yo-jong who emerges, for the time being at least, the custodian of power in North Korea. But fathoming just when this takes place, and for how long, will remain difficult to ascertain in a state which goes to such lengths to shut itself off from the outside world.

US suffers worst economic decline on record in second quarter as GDP contracts by 32.9% 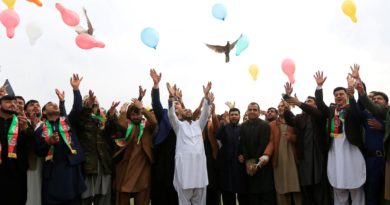