A group co-founded by Donald Trump’s campaign manager for the 2020 presidential election has released a new election ad that only features the president for a couple of seconds.

A speech Mr Pence gave at an event for the organisation’s Great American Comeback Tour is played over images of him meeting workers and detailing policies put in place by the administration.

Mr Trump is only shown in the ad once and is featured for two seconds – signing an updated free trade agreement with Canadian prime minister Justin Trudeau and Mexican president Andrés Manuel López Obrador.

He adds: “And I promise you in the days ahead we’re going to continue to create a solid foundation for whatever challenges may lie ahead. And we’re going to do it in a way that puts America back to work. A great American comeback has begun.”

He added: “You would think it’s Pence watching the new ad by a well-funded pro-Trump outside group (co-founded by Brad Parscale). Lots of Pence here….and just a few blurry seconds of Trump.”

Mr Parscale was the digital media director for Mr Trump’s 2016 presidential campaign, and now serves as manager for his 2020 reelection campaign.

The president has seen a decline in support in numerous polls over the last few months, after his responses to the coronavirus pandemic and Black Lives Matter protests, were criticised.

Meanwhile, the Democratic nominee for the 2020 presidential election, Joe Biden, has seen his support in polls rise in the same period, and On Wednesday, the former vice president opened up his biggest poll lead over the president since his nomination was confirmed.

A new national survey by Quinnipiac University showed that voters backed Mr Biden over the president 52-37 per cent. 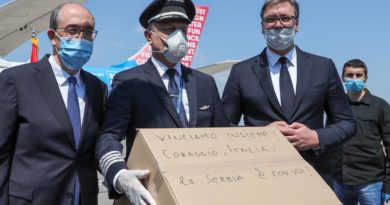