Jamie Ritchie hopes the recent form of both Edinburgh and Glasgow can help give Scotland an edge in the upcoming Six Nations.

Glasgow have won seven of their last eight games in all competitions, while Ritchie watched on from the sidelines as his Edinburgh colleagues made it three wins on the spin with an impressive 20-14 Champions Cup win over Saracens on Sunday.

“Certainly for the guys who played in that game, it will be a definite confidence boost knowing there were so many (England) internationals in that Saracens team and we dominated them for most of the game,” said Scotland captain Ritchie.

“We’ll take a huge amount of confidence from that. Both Edinburgh and Glasgow have hit a bit of form coming into this tournament so that can only bode well for our squad.”

Ritchie’s side kick off their campaign away to England a week on Saturday, but Twickenham no longer holds the same sense of trepidation for the Scots after they drew there four years ago and then followed it up with victory in 2021, ending a 38-year wait for success at the home of the Auld Enemy.

Results in recent years mean Gregor Townsend’s team go into the tournament with a sense of expectation rather than hope.

“Growing up watching Scotland it was often hopefully, but for us now we’re confident that we can win every game we go into,” said Ritchie.

“For us, it’s more about dealing with what comes along with that expectation in terms of criticism and scrutiny if you don’t live up to those expectations.

“We’d rather have it that way though because it shows the nation has belief in us that we can play well and win games.” 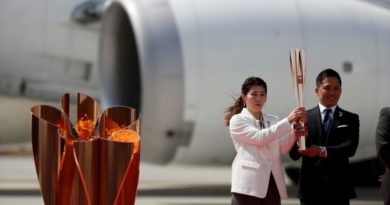 Olympic cauldron in Japan ignited with flame from Greece

UFC 282 card: Paddy Pimblett and Darren Till fights this weekend plus Jan Blachowicz vs Magomed Ankalaev