n December 1941, when the United States entered the Second World War, Jack Kennedy was in the midst of an affair with a married Danish former beauty queen who was under investigation by the FBI as a German spy. Her name was Inga Arvad; he called her “Inga Binga”. (She had been seen sitting in Adolf Hitler’s box at the 1936 Olympics.) Kennedy was an officer in Naval Intelligence at the time, a job arranged by his father, Ambassador Joseph Kennedy. Bored by desk duty, he was pulling strings to get into a more glamorous posting – PT boats – despite debilitating back pain and a history of poor health. Young Kennedy was not exactly spit polished or squared away. At prep school, he had dressed in whatever clothes he found lying on the floor; at college, he had a valet to pick them up.

Those are all facts, but, of course, not the whole truth. Arvad was clever and perceptive, and she saw in Kennedy his abiding desire to serve and to do good. JFK was tender and adoring toward Arvad even after she stopped sleeping with him. (And she was no German spy, as the FBI wiretaps eventually showed.) JFK did use political favours to get a better post in the navy, but, as one of his commanders noted, “there are a lot of people in America who use political influence to keep out of combat, but Jack Kennedy used it to get into combat.” He may have been an entitled Harvard boy, but his men worshipped him, especially when, after his PT boat was cut in half by a Japanese destroyer, he repeatedly risked his life to save them.

Jack Kennedy was a spoiled and occasionally reckless young man, and he had a habit of treating women – and, sometimes, his male friends – badly. But as Fredrik Logevall shows in his superb JFK: Volume 1: 1917-1956, Kennedy was a far deeper, worthier, more interesting character than the familiar revisionist cliche. He was endlessly curious, usually solicitous, often savvy and self-aware, and, when he wanted to be, careful. He was hardly callow. He had a premature sense of his own doom, which he faced with bravery and good cheer, albeit cloaked at times in prep school cynicism.

“Detachment” might be a better word. Kennedy’s cool bordered on coldness. His father was overbearing and overinvolved, and his mother (partly because she had been hurt by her husband’s infidelities) was remote. She was constantly organising the lives of her nine children, but when Jack was a sickly boy and teenager an hour or two away at school, she visited him only once. Jack’s seemingly effortless grace, so seductive to women and men alike, was a kind of armour.

But it was much more than that. Jack loved and listened to his domineering father, yet at key moments he also resisted his will. He had the ability to step back and not be swept away – not by his father’s desperate need to appease Hitler on the eve of the Second World War, not by any political fad of the moment. As he grew into a politician, eventually to become a statesman, he was able to maintain a critical distance. He was passionate about politics – an honourable profession, he believed – but he was never polemical or even terribly partisan. He knew that it could take courage to be a moderate, to find the middle way. His heroes were the politicians who compromised on policy but not principle.

He didn’t always live up to his own ideals. The Kennedy family was close to Joe McCarthy, a witch-hunting demagogue who thrived during the Red Scare of the early 1950s. JFK privately scorned McCarthy’s bullyboy tactics, but (like a lot of politicians) he shied from calling him out. JFK’s record on civil rights was cagey; like most Democrats, he did not want to offend the party’s base in the Deep South. He was an early skeptic on US intervention in Vietnam. Ever inquiring, he had gone there himself as a young lawmaker and seen the potential for quagmire. The lesson, of course, did not entirely stick.

It is hard, in the Age of Trump, not to feel nostalgic about the Age of Kennedy – to remember that once there was a leader who read avidly, who believed in the power of words not to divide and inflame but to call on our better angels. It has become conventional wisdom that Kennedy’s best speeches – and indeed, his 1956 Pulitzer Prize-winning book, Profiles in Courage – were ghostwritten by his gifted aide, Theodore Sorensen. Logevall convincingly shows that although Sorensen certainly improved Kennedy’s prose (and his poor spelling and grammar), the overarching themes and insights came from Kennedy.

Kennedy mocked pieties, but he was a deep romantic, in a dangerous sort of way. His wife, Jacqueline Kennedy, was right to have been wary when Jack came courting. She knew from her philandering father not to trust in handsome men with wandering eyes. But she saw an intelligence in Kennedy that matched her own, and she was, demurely but fiercely, ambitious for him. When the couple met in the early 1950s, Jackie sensed immediately, she later told a friend, that Jack “would have a profound, perhaps disturbing” influence on her life. “Jackie told a friend she was frightened, envisioning heartbreak for herself, but swiftly determined that such heartbreak would be worth it,” Logevall writes. (“Kennedy’s recollection was plainer: ‘I leaned across the asparagus and asked for a date.’”)

Why should you read the umpteenth book about the most famous of Kennedys? Whole forests have been cut down to explain the Kennedy myth. The short answer is that Logevall’s book is smart and very readable. A professor of history at Harvard who won the Pulitzer Prize for a book on the United States’ early engagement in Vietnam, Logevall has a gifted historian’s grasp of the times as well as the life of JFK. At more than 600 pages of text, his book is long and ends four years before Kennedy is elected president. But this reader had trouble putting it down.

Thomas is the author of “Robert Kennedy: His Life” and, most recently, “First: Sandra Day O’Connor.”

Coronavirus at 10 million: A visual guide to how pandemic spread around the world 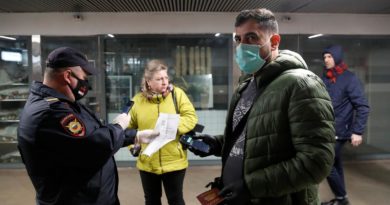