Joe Biden vowed to move the country past its “season of darkness” under Donald Trump, as he formally accepted the his party’s presidential nomination on the final night of the Democratic National Convention.

“The current president has cloaked America in darkness for far too long. Too much anger. Too much fear. Too much division,” the former vice-president said on Thursday evening.

“I give you my word, if you entrust me with the presidency, I will draw on the best, not the worst,” he said. “United we can and will overcome this season of darkness in America.”

Mr Trump, who is trailing in the polls in nearly all swing states to Mr Biden, reacted bizarrely to the event, complaining wrongly that photo ID was required to enter the virtual convention.

Vanita Gupta, a prominent civil rights campaigner, has vowed to challenge Donald Trump after the US president said he would send sheriffs and other law enforcement agents to election polling stations to monitor what he claims is widespread fraud, but is in fact largely non-existent.
An extraordinary clip of a Donald Trump campaign stop in Pennsylvania is being shared widely on social media.

In it, in the space of 56 seconds the US president: claims the US “kept the oil” after its military campaign against Isis in Syria; condemns the Iraq War; assails a mosquito after it flies near him on stage then claims “they’ll say it’s cruelty to animals”; and  complains about people who want to protect sharks instead of seals.

Did Joe Biden and the Democrats finally show they have what it takes to beat Donald Trump?

After four evenings of live streamed speeches, of videos showing Joe Biden as a young man, as a father, and as a vice president, after four days of earnest seriousness, with the occasional joke, without doubt the most thrilling part of the Democratic National Convention played out in a parking lot in Delaware.

Having concluded the speech in which he formally accepted the Democrats’ nomination for president, a solid, seemingly heartfelt address, he and his wife Jill donned their masks and stood to watch the fireworks from the car park of the Chase Centre in Wilmington, from where he had delivered his speech. Soon, he was joined by Kamala Harris, and her husband Doug Emhoff and together they waved and smiled and even danced a little bit.

The sheer joy of the moment – laughter, relaxed smiles, people driving their vehicles and waving flags, albeit at a safe distance – at a time when the pandemic has left the nation anxious and fearful, was a huge success.

Senator Chris Coons, a Democrat from Delaware, has revealed he and his team discovered mail sorting machines “thrown outside” and ruined after being left outside in the rain.

It comes amid an apparently deliberate attempt by the White House to slow deliveries ahead of what is expected to be an unprecedented surge in mail-in ballots at November’s election due to coronavirus.

Brayden Harrington has given a widely praised speech at the Democratic National Convention arguing why voters should elect for fellow stutterer Joe Biden ahead of Donald Trump.
Joe Biden formally accepts Democratic nomination: ‘We will overcome this season of darkness’

“The current president has cloaked America in darkness for far too long. Too much anger. Too much fear. Too much division,” the former vice president said on the final night of the Democratic National Convention.

“I give you my word, if you entrust me with the presidency, I will draw on the best, not the worst,” he said. “United we can and will overcome this season of darkness in America.”

Hunter Biden, candidate’s son at centre of Trump effort to bring down his father speaks at DNC

Hunter Biden, who has remained out of Joe Biden’s spotlight as his father sought the presidency, made a rare public appearance at the 2020 Democratic National Convention to introduce the Democrats’ nominee to face Donald Trump.

In a video with his sister Ashley, the siblings called their father “the strongest shoulder you can lean on” and “rocksteady” before letting Beau Biden, their sibling who died in 2015 following a brain cancer diagnosis, have the “last word” on their father.

The segment cut to Beau Biden’s remarks from the 2012 DNC: “In moments both public and private, he’s the father I’ve always known, the grandfather my children love and adore, my father, my hero.”

In a moment of predictable mirth for Democrats, Donald Trump claimed overnight the Democratic National Conventionn was requiring ID cards “with a picture” in order to be granted entry.

The US president appeared to forget the convention is in fact entirely virtual.

Here is some of the, erm, kinder reactions to Mr Trump’s misinformation.

In a never-before heard recording obtained by The Independent, Donald Trump told a group of civil rights leaders that he listened more to the African-American community “than anybody else in this room”.

The meeting took place in January 2017 and was arranged by Trump’s transition team ahead of his inauguration as a way of improving relations between black Americans and the incoming president.

But aides from the time now see it as an historic missed opportunity, and in the words of one the event was “the most disastrous outreach meeting in the history of presidential transition”.

Here’s the full story from Andrew Feinberg in Washington:

“Maybe George Floyd murder was a breaking point, maybe John Lewis’s passing the inspiration, but however it’s come to be, however it’s happened, America’s ready, in John’s words, to lay down, quote, the heavy burden of hate at last and end the hard work of rooting out systemic racism,” Biden said.

Kamala Harris a powerful voice that will help next president restore the promise of America, Biden said.

“Whether it’s the existential threat posed by climate change, the daily fear of being gunned down in school, or the inability to get started in your first job, it will be the work of the next president to restore the promise of America to everyone,” Biden said.

“And I’m not going to have to do it alone, because I’ll have a great vice president at my side, Senator Kamala Harris. She’s a powerful voice for this nation. Her story is the American story. She knows about all the obstacles thrown in the way of so many people in our country.”

“Women, black women, black Americans, South Asian Americans, immigrants, the left out and the left behind. But she’s overcome every obstacle she’s ever faced,” he added.

“We’ll have a national mandate to wear masks, not as a burden but as a patriotic duty to protect one another,” Biden said.

“Let me take this moment to say something we don’t say nearly enough, thank you Mr president. You were a great president. A president our children could and did look up to. No one is going to say that about the current occupant of the White House,” Biden said.

‘No rhetoric is needed. Just judge this president on the facts’ — Biden

“Five million Americans infected by Covid-19, more than 170,000 Americans have died. By far the worst performance of any nation on earth. More than 50 million have filed for unemployment this year, more than 10 million people are going to lose their health insurance this year. Nearly one in six small businesses have closed this year,” Biden said.

“And this president, if he’s reelected, you’ll know what will happen. Cases and deaths will remain far too high. More mum and pop businesses will close their doors, and this time for good. Working families will struggle to get by. And yet the wealthiest one per cent will get millions of dollars in new tax breaks.”

‘The most difficult moment America has ever faced’ — Biden

“No generation ever knows what history will ask of it. All we can ever know is whether we’re ready when that moment arrives. And now history has delivered us to one of the most difficult moments America has ever faced,” Biden said.

“Four, four historic crises all at the same time. A perfect storm. The worst pandemic in over a hundred years. The worst economic crisis since the Great Depression, the most compelling call for racial justice since the sixties, and the undeniable realities and just the accelerating threats of climate change.”

“The current president has clocked America in darkness for much too long, too much anger, too much fear, too much division,” Biden said.

“If you entrust me with the presidency I will draw on the best of us, not the worst. I’ll be an ally of the light, not the darkness.”

WATCH: Boy with stutter shares advice Joe Biden gave him in touching DNC speech
WATCH: Senator who lost both her legs in Iraq War calls Trump ‘coward-in-chief’
ICYMI: Trump claims ‘something is wrong’ with Joe Biden and compares himself to a chess grandmaster

Donald Trump, counter-programming the Democratic National Convention, told Fox News “something is wrong with Joe Biden” that leaves the party’s soon-to-be presidential nominee unable to “fight back” against leftist forces.

“They’ve forced him to support things that no one ever would have thought,” the president told Sean Hannity of the progressive wing of the Democratic Party. “And he’s not in a position to fight back. … Something’s going on. I assume we’ll be able to find out … sooner rather than later.

A few minutes later, the 74-year-old Mr Trump compared himself to a world-class chess player, contending Mr Biden lacks the mental capacity at 77 to stand up to the world’s harshest leaders, like Russian President Vladimir Putin and North Korea’s Kim Jong Un.

Mr Hannity, without providing any medical evidence or an expert to speak to his observation, made this claim about Mr Biden: “He seems frail to me.”

Who is Hunter Biden and could he impact his father’s campaign?

On the speaking schedule tonight is Joe Biden’s son Hunter, who has so far been relatively quiet during the campaign following some messy dealings in Ukraine.

Who is he? The Independent’s Alex Woodward took a look at the controversial background of the lesser-known son.

Please allow the blog a moment to load 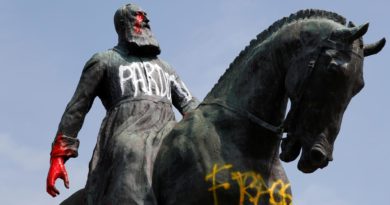 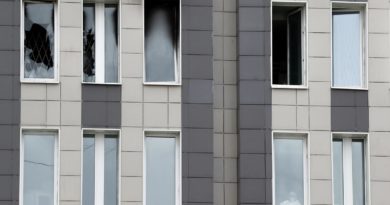 Russia suspends use of ventilator type sent to U.S. after fatal fires