A South Australian man has denied that his Halloween display resembled a Ku Klux Klan lynching scene, but promised to tone it down after neighbours reported it to police.

Daniel Abbie, from the town of McLaren Vale in south Australia, set up the display, which showed several figures in white robes dancing around a bonfire as a “body bag” made from a black plastic bag hangs from a nearby tree.

The father of three had intended for the display to show “little ghosts” dancing around a fire with a body bag nearby for “shock value”, he told local media.

He put the display up on Sunday and the following day, police officers arrived at his doorstep after receiving complaints from neighbours who likened the display to historic lynchings carried out by members of the KKK.

After officers explained the situation to him, he told the Adelaide Advertiser that he realised how people “might interpret it that way”.

He said he had “absolutely no intention” for the display to resemble a racist lynching and pointed out that his ghosts had round heads while KKK members wore distinctive pointed white hoods.

Speaking to local broadcaster 7News on Tuesday, Mr Abbie said he would not take the display down but conceded to making some “minor changes” to the display to keep the peace.

“We did consider taking it down, but after hearing so many people say they loved it we thought we would leave it up and people who don’t like it can continue with their day and drive past and ignore it,” he said.

A spokesperson for the South Australia Police said the force had “nothing further to add on the subject of Daniel’s Halloween decorations”.

“Little ghosts and ghouls should always be accompanied by a trusted, responsible adult if going door to door.” 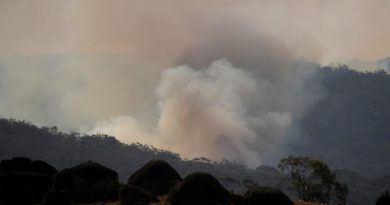