Michelle Obama has reflected on the time her brother, Craig Robinson, was accused of stealing his own bike by Chicago police officers when he was just 10 or 11 years old.

The moment was brought up during the latest episode of the former first lady’s self-titled Spotify podcast with Mr Robinson and their mother, Marian Robinson, as the two guests for the week.

With her brother and mother on the podcast, Mrs Obama focused the episode around childhood and parenting. One memory that stood out to her was when a young Mr Robinson was accused of stealing his own bike: a yellow ten-speed Goldblatt gifted to the child by their parents.

Mr Robinson estimated he was about 10 or 11 years old when two Chicago police officers stopped him while he was riding his bike. During the incident, the officers had grabbed the bike and refused to let it go even after the child pleaded with them and said it was his.

“I was always taught that the police are your friends … and they’ll believe the truth, and I was tellin’ ‘em the truth and this guy would not believe me,” Mr Robinson said.

“I was like ‘Oh, you got this all wrong, this is my bike. Don’t worry, this isn’t a stolen bike,’ and [the cop] would not believe me, and I was absolutely heartbroken. And I finally said to him, ‘Listen, you can take me to my house, and I will prove to you, this is my bike,’” he continued.

Help came for Mr Robinson when the cops brought him back to home to his mother, Marian – who “had that tight lip” as she prepared to defend her son.

Mrs Robinson then chimed into the podcast where she revealed the cops were friends with the people who initially accused her son of stealing the bike. She demanded that those people come directly to her home so they could “admit [they] made a serious mistake”.

Overall, Mr Robinson called the experience “heartbreaking”, specifically because he felt the cops were trying to “trip” him up when questioning him about where he got the bike.

“I could tell [the cops] were trying to ask me questions that would trip me up,” he said. “If I wasn’t so sure that that bike was mine and showed any kind of reticence, I could see them taking me off to the police station, not calling mom until after I’ve been, you know, booked or whatever they do.”

This was when Mrs Obama chimed into the conversation, and she mentioned how the story illustrated a problem other black families face within their neighborhoods even if they strived to teach their children important values.

“Nobody thinks about, you know, the fact that we all come from good families that are trying to teach values, but when you leave the safety of your home and go out into the street, where being black is, is a crime in and of itself, we have all had to learn how to operate outside of our homes with a level of caution, and fear, because you never know,” Mrs Obama said.

It was then revealed that the two police officers involved in the incident were both black males, which the family said proved how racism was ingrained in the system.

The story on the podcast ended with Mr Robinson commenting about the relationship with police officers and black communities has not changed, specifically as Black Lives Matter protests calling for police reform spread across the country.

“That’s the perfect example of what all of these young, black people are dealing with now, because this was, almost fifty years ago?” he said.

CNBC reporters get into heated on air row over face masks 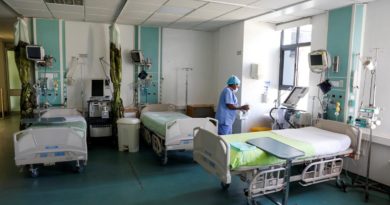