A man accused of murder escaped from jail after using knotted sheets to descend from a 12th floor cell.

Pablo Robledo, 34, along with his cell mate, Jose Hernandez, used the sheets to clamber down from from the Oklahoma County jail in Oklahoma City.

Mr Robledo, who was being held on a first-degree murder charge, was found and arrested Friday afternoon in southwest Oklahoma City by city police.

Mr Hernandez fell or jumped from the makeshift rope around the fourth floor, apparently breaking a leg, before being found and subsequently arrested, officials said.

Jail spokesman Mac Mulling said it appeared the men threw a mattress from building to help them, and that Mr Robledo was seen on the prison’s video system at around 5.30am on Friday, shortly before the men made their escape.

Photographs showed the knotted rope that men used still hanging from the building.

TV channel KOCO reported that when the jail was completed in 1991, engineers and architects said the $52m facility was escape proof because of its design.

According to a story in The Oklahoman, 27-year-old Bill Linville used a mop handle to break through a second-floor window. He was at large for seven hours.

Less than a week later, another inmate escaped. 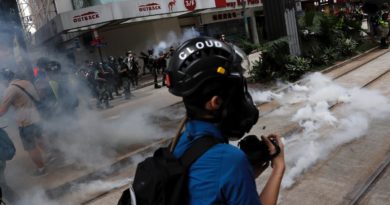 Coronavirus in Japan: Why the country’s relatively small number of Covid-19 cases may be a mirage