The use of military surveillance planes on civil rights demonstrations already raised concerns for many, including the Air Force Inspector General, but one particular flight stuck out: a deployment of a National Guard plane and helicopter to monitor small, peaceful demonstrations in the suburbs of Sacramento. El Dorado Hills, California, also happens to be where the head of the California National Guard lives, the Los Angeles Times reported.

“We had 10,000 soldiers deployed,” Gen. Baldwin told the paper. “We were doing hundreds of mission taskings.”

State officials from the Office of Emergency Services requested the aircraft on behalf of the El Dorado sheriff’s office, which asked for air support to help monitor demonstrations in the area, which reportedly only numbered around 100 people. The suburb was reportedly the only place in California to use this specific aircraft for surveilling protests, even as much larger cities like Los Angeles and San Francisco experienced protests that included some violent elements. Looting was reported amid previous demonstrations in neighboring Sacramento.

But state and federal officials, as well as National Guard personnel themselves, blasted the use of the RC-26 spy plane as an operational failure and a violation of civil rights.

“The use of the RC-26 to meet the sheriff’s need for aerial support to provide situational awareness for law enforcement is concerning and should not have happened” said Nathan Click, a spokesperson for California Governor Gavin Newsom, who oversees the state’s National Guard. “It was an operational decision made without the approval—let alone awareness—of the Governor. After the incident, operational policies and protocols were reaffirmed and strengthened to ensure RC-26 aircraft are not used for these incidents again.”

The Air Force Inspector General launched an investigation into the use of the aircraft, following concerns from Defense Secretary Mark Esper and Air Force Secretary Barbara M. Barrett, Air Force Magazine reports. The report found that the flights didn’t get clearance from the Defense Secretary, might’ve been used to supply information to break up peaceful demonstrations in Phoenix, and marked the first use of this aircraft during civil disturbances.

“Properly approved missions can support civilian law enforcement, but there is no scenario in which it is acceptable or permissible to use DOD assets to deter demonstrations and protests, assuming they remain lawful,” the heavily redacted report reads.

The report also noted that while the aircraft collected information on how groups of people were moving, they did not identify individual protestors.

“El Dorado Hills was the most monitored place in California,” he said. “Why was that? What was the threat? They are absolutely covering this up.”

In Washington D.C., unidentified federal agents were sent in to secure demonstrations, prompting Democratic Senators Tim Kaine and Mark Warner to propose a bill banning such unmarked federal personnel from operating during protests.

Why locusts are descending on East Africa 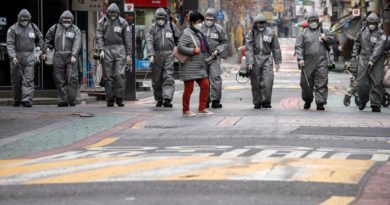