BEIJING (Reuters) – Chinese authorities and the World Health Organization (WHO) say a new strain of coronavirus is behind the outbreak of pneumonia in the central city of Wuhan, which has erupted just ahead of the Lunar New Year, the country’s biggest festival.

Some experts say the strain may not be as deadly as some other strains of coronavirus such as Severe Acute Respiratory Syndrome, which killed nearly 800 people worldwide during a 2002/03 outbreak that also originated from China. But little is known about the new virus, including its origin and how easily it can be transmitted between humans.

As of Jan. 19, there were 65 confirmed cases of patients with pneumonia caused by the new strain of coronavirus. All patients were either Wuhan residents or people who recently went to the city. Their symptoms included fever, coughing and difficulty breathing.

Of the 62 patients in Wuhan itself, two have died and 19 have been discharged.

Thailand has also reported two confirmed cases of the pneumonia, both of whom were Chinese tourists from Wuhan. Japan has also confirmed one case of a Japanese citizen who visited Wuhan.

LITTLE KNOWN ABOUT VIRUS ITSELF

China’s National Health Commission said in a statement on Jan. 19 the source of the virus hasn’t been found and that its transmission path has not been fully mapped.

The outbreak is strongly linked to a seafood market in Wuhan, but some patients diagnosed with the new coronavirus deny exposure to this market.

Health officials say there is no clear evidence the virus spreads easily from one person to another, but they cannot rule out the possibility of human-to-human transmission.

Wuhan municipal authorities released information about a married couple that contracted the virus on Jan. 15. The husband, who got sick first, worked at the market but the wife denied any exposure to the market in question.

The authorities did not explicitly state whether this was a case of human-to-human transmission, however.

There is no vaccine for the new virus. Symptoms include fever, difficulty in breathing as well as pneumonic infiltrates in the lungs.

Chinese authorities have stepped up monitoring and disinfection efforts ahead of the Lunar New Year holiday in late January, when many of the country’s 1.4 billion people will travel domestically and overseas.

Airport authorities in the United States as well as many Asian countries, including Japan, Thailand, Singapore and South Korea, have stepped up screening of passengers from Wuhan.

The World Health Organization sent directives to hospitals around the world on infection prevention and control. It has advised against travel or trade restrictions based on available information, however. 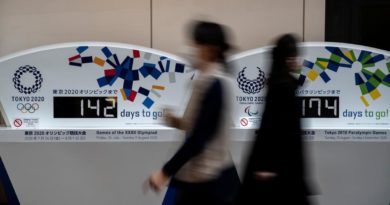 Japan committed to hosting Olympics on schedule even as virus spreads

These Maps Show How COVID-19 Risk Varies By Neighborhood

Cruise off California Caught up in Coronavirus Outbreak