New York Governor Andrew Cuomo has denied having any intentions to run for the White House after sparring with Donald Trump over a lack of federal assistance amid the coronavirus pandemic.

The Democrat told reporters during a press briefing on Saturday that he had “no political agenda” or plans to hold higher office after his tenure as the state’s governor.

“I’m not running for anything,” he said. “I’m going to be governor of the state of New York until the people kick me out … then I’m going to spend time with my family, and that’s that.”

“I have no political agenda”, he added.

The comments came just a day after Mr Cuomo lambasted the federal government while suggesting states have received “zero, zilch, nada in unrestricted aid” after three bills were passed to address the pandemic.

The governor has also received increasing calls to launch a bid for the White House in the future, and other recent reports have claimed those close to him have primed Mr Cuomo for the vice presidency — despite Joe Biden, the presumptive Democratic presidential nominee, having already vowed to select a woman for the job.

On Saturday, Mr Cuomo was seemingly attempting to smooth over his apparent tensions with the federal government, while making the case for its continued assistance to the state.

“The Republican doctrine used to be limited government and state’s rights,” he said. “I’m a good distribution mechanism … because I know what’s going on in the state.”

He added: “If you want us to reopen, we need funding for the state.”

Mr Cuomo has walked a fine line in recent weeks when working with the Trump administration, at times publicly thanking it for providing aid and at other moments demanding more from the federal government and its national stockpile, which includes critical supplies like ventilators and personal protective equipment (PPE). The governor noted on Saturday that the federal government sent 1.5 million cloth masks to be distributed among the public in New York.

The governor also provided updates about state figures surrounding Covid-19 during the weekend briefing, telling reporters: “Happy days are not here again: we still have about 2,000 people yesterday” arriving to local hospitals with the novel virus.

“We’re not at the plateau anymore, but we’re still not in a good position,” he said, adding that 540 people died yesterday in New York due to complications from Covid-19, a decline from 630 the day prior.

“If you look at the past three days, you could argue that we’re past the plateau and starting to descend,” Mr Cuomo added. “It’s only three days, but that’s what the numbers would start to suggest.”

While Mr Cuomo has discussed a “reopening” of the state, he suggested earlier this week that New York would not be able to follow along with the White House plans to start back up the country’s economy in mid-May if it does not receive enough funding to ramp up its testing capabilities.

Following the governor’s press briefing on Friday, Mr Trump attacked him for “complaining” in a series of tweets.

“Governor Cuomo should spend more time ‘doing’ and less time ‘complaining’. Get out there and get the job done. Stop talking!” the president wrote. “”We built you thousands of hospital beds that you didn’t need or use, gave large numbers of Ventilators that you should have had, and helped you with testing that you should be doing.”

The governor then fired back to “keep emotions and politics out of this” — a sentiment he echoed the following day during his latest briefing.

“There is no time for politics,” Mr Cuomo said on Saturday. “If you have partisan division splitting this nation, it’s going to get worse.”

‘Thanks, goodbye, and good riddance!’ EU’s parting message to UK gets lost in translation 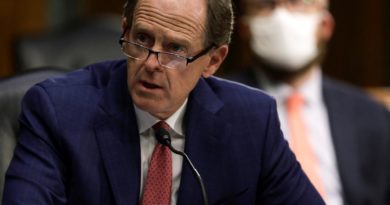