The hashtag #NotMyChild trended on Thursday after new attack videos took aim at Donald Trump‘s push to reopen schools amid the coronavirus pandemic.

New York Times bestselling author Dan Winslow put together a mash-up of the Trump administration’s responses to reopening schools, saying that the president “wants you to hurt your own child for his re-election”.

“Now Donald Trump wants you to abandon your most primal and powerful motherly instinct to protect your child,” the video says.

“Trump and Betsy DeVos have said children don’t get coronavirus – tell that to the families of these children who all died of coronavirus.”

The Trump administration has been accused of “trying to bury” expert guidelines that said fully reopening schools and universities posed the highest risk of spreading coronavirus compared to partial or virtual openings.

Mr Trump has said he disagreed with the CDC’s “expensive guidelines” while Mike Pence said the CDC would release new guidelines this week that would not be as tough.

The White House’s press secretary, meanwhile, said that guidelines to reopen schools would be left to local governments.

“We leave it to localities as to exactly what guidelines will work because guidelines in a state like North Dakota need to look different than a locality like Miami,” Kayleigh McEnany said on Fox & Friends.

“The CDC guidelines are out there as a best-case scenario of this is how a school should look….but several of the principles in there are not feasible and not possible–which even the CDC guidelines say.”

Co-opting Mr Winslow’s #NotMyChild hashtag, a second video focused on the school reopenings from the perspective of a child “as she heads back into a life she’s told is safe”.

“Mr president, this will be my last letter. We loved and trusted you. You said we would all be ok. You said we need to go back to school,” the video said.

“So we did, but never knowing I’d bring something back home with me. My father died today. And it was me who killed him.”

The creators from “The Protest Films” responded to online criticisms that they were using an imaginary child to spread fear for political gain.

“To the Trumpers trolling around saying ‘It’s fake, fictional’ yes, we currently don’t have the funds to travel into the future and shoot this film for real,” the filmmakers responded on YouTube.

“It is a work of fiction, just like your president was. Sh*t tends to get real when people get complacent. Now go back to watching your presidents [sic] head plastered on muscular men in Hollywood movies and dream on Nov 3rd Your president goes from fiction to history or prison.”

Dog walker wrestles fugitive to the ground then high-fives police 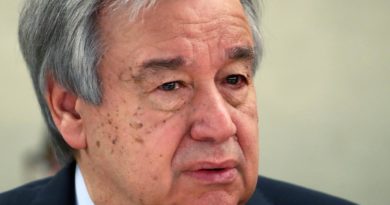