On Friday, Pfizer CEO and chairman Albert Bourla announced that the company has filed a request to the U.S. Food and Drug Administration (FDA) for emergency use authorization of its COVID-19 vaccine, making it the first to do so. In a discussion on TIME 100 Talks, Bourla says that if the FDA authorizes the vaccine, the company will be ready “within hours” from receiving the green light to start distributing the vaccine. Pfizer has been manufacturing doses even while safety and efficacy tests were ongoing, in order to avoid delays in shipping once authorized.

According to Bourla, Pfizer is on “on track” to deliver the 50 million doses promised to the U.S. government by the end of the year, with 1.3 billion doses through next year.

In an in-depth conversation about the journey the company has taken in developing its vaccine, Bourla admitted that, throughout the process, he wasn’t always sure that having a safe and effective vaccine ready for FDA review in less than a year was possible. “Conviction is a part of it, so I was always telling [our teams] that we will make it, and we will make it by October, and if not us, then who?” he says. “But I knew that it was an extremely risky suggestion, I knew it was going to be difficult, and the stars needed to be aligned all the way to the end.”

Pfizer capitalized on a partnership begun in 2018 with German company BioNTech, which was founded by a husband-and-wife team of scientists with expertise in a genetic technology called mRNA. The platform is fast and flexible for developing vaccines, since it only requires knowing the genetic sequence of the virus the vaccine will target, rather than growing and manipulating the virus in question.

Still, no mRNA-based vaccine against an infectious disease had ever been approved, so Pfizer and BioNTech began exploring whether influenza might be the first. Instead, when the pandemic hit a year later, the teams shifted their attention to SARS-CoV-2, the novel coronavirus that causes COVID-19, with surprising success. Bourla says the partnership is built on a mutual focus on advancing science, and that the two companies began work, including sharing confidential information, before signing a formal contract, since those agreements can take months. “In fact, we are still finalizing the contractual obligations we have that we need to sign with them,” says Bourla. “It’s the perfect relationship for me. Ugur [Sahin, BioNTech’s co-founder and chief executive] is a wonderful human being, and a great scientist. He shares the same passion [as I do] about saving lives and I’m very optimistic that not only will we do very well together bringing a COVID-19 vaccine to the world, but later hopefully a flu vaccine.”

Bourla also believes the success of the Pfizer/BioNTech vaccine, as well as that of Massachusetts-based biotech Moderna (which also has an mRNA COVID-19 vaccine candidate, shown to be 94.5% effective) validates the mRNA platform, and makes it a serious contender for future vaccines and drugs against emerging infectious diseases. That validity of mRNA vaccines will be further tested once their efficacy can be compared to those of other vaccines that use the more proven methods of relying on weakened cold viruses to deliver viral material to the immune system, or selected fragments of viral proteins.

While he expressed concern about the skepticism and mistrust that many American have expressed about the COVID-19 vaccines, mostly because they were developed so quickly, Bourla says he hopes the completion of the election and the magnitude of the efficacy and safety data start to reassure people. “The problem is that this vaccine, and the pandemic in general, became the focal point of political debate,” he says. “It was discussed in political rather than scientific terms. We reached an unthinkable point that wearing a mask is a political statement, which I think is wrong. Wearing a mask is something you need to do because science is telling you to do it.”

He noted that in an effort to reassure the public about the scientific integrity of the vaccine development and testing process, vaccine makers in the pharmaceutical industry came together in an unprecedented show of support against political pressure by pledging to stick to scientific standards and nothing else. “Myself, I released a lot of letters saying I will never succumb to any political pressure,” he says. “The only pressure we feel at Pfizer is the pressure 7 billion people around the world are giving us for a solution to this pandemic.”

Vaccine makers are a little less united on the question of whether they should profit from a pandemic shot. While some have said they will price their vaccines so they don’t profit from them, Bourla says Pfizer is making its vaccine available on a non-for-profit basis only for lower-income countries receiving vaccines through the World Health Organization vaccine distribution coalition run by GAVI. “We have elected for developed countries, to give [the vaccine] at a very low price [around $19.50]. We believe the price allows governments all over the world to give the vaccine free to their citizens,” he says. “If you think about the economic value of a vaccine—I’m not speaking about the human value because there is no way to measure human life—I think the millions of jobs that will not be lost, that hopefully will come back, and the billions in economic value that a successful vaccine will enable—I think it’s not appropriate to discuss if we sell it at $19.50 per dose.”

Bourla would not speculate on how long the FDA might take to decide on the company’s EUA request, but given the urgency of the pandemic, that decision could come soon. The agency will likely take into consideration the fact that the vaccine’s 95% effectiveness is in protecting against COVID-19 disease—not preventing infection from the virus. But with cases of COVID-19 continuing to surge around the world, stalling the virus and preventing people from getting sick would be a welcome advantage. More studies will also explore whether people who don’t become sick because they are vaccinated are less likely to spread infection; if that’s the case then the vaccines will be even more critical for controlling the pandemic.

“I hope the same time next year, we will be in a very, very different place,” he says. “When you have vaccine protection that is that high, 95% for example”—the effectiveness level Pfizer’s vaccine has shown in studies—”it takes less time to be able to develop protection through a vaccination scheme. So I truly believe the light at the end of the tunnel is not only real but it is bright and is coming. We need to be patient.” 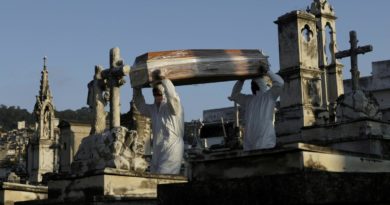 Scientists Are Training Dogs to Sniff Out COVID-19

Perry Lewin has been in the pawn industry for 28 years, but he’s never quite seen a year like this