Get our free Inside Washington email

An Arizona police lab has found nothing in an envelope that the Kari Lake campaign claimed contained a “suspicious” powder.

The letter was sent to the campaign headquarters of Ms Lake in Phoenix, Arizona on 5 November.

A worker said it held a “suspicious white powder”.

Phoenix Police Department communications director Donna Rossi told The Arizona Republic that “the state lab tested the items turned over to them” and that they “determined there was no substance inside”.

According to DailyMail.com, the campaign thought at the time that it was a “terroristic attack, trying to intimidate Kari and the campaign staff”.

“Yesterday, one of Kari’s staffers opened up an envelope that had a suspicious white powder in it and had a letter in there with a bunch of vulgarities and ranting and raving about Kari,” a source close to the campaign told the outlet earlier this month. “The employee then noticed a second package that was exactly like the first one she had opened and she reported it.”

On 25 October, the office of Ms Lake’s Democratic opponent Katie Hobbs was broken into.

The Lake campaign reacted by holding a press conference and joking that surveillance footage showed someone entering Ms Lake’s office as they showed images of a person in a chicken costume.

A hazmat team and a bomb squad both responded to the scene to take care of the envelope which was later revealed to be harmless.

At the time of the incident, Phoenix Police Department Sergeant Phil Krynsky told DailyMail.com that “officers responded to a found property call at an office building near 40th Street and Camelback Road. When officers arrived they learned there were suspicious items located inside the mail. Additional resources responded to collect the items and secure the area”.

Ms Lake is trying to sow doubt in Arizona’s gubernatorial election as Democrat Katie Hobbs extends her lead to 26,979 votes.

The race remains too close to call, with voters likely waiting until next week to learn the result of the race. 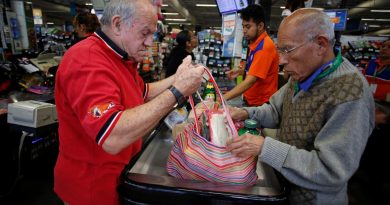 Mexico City goes back to the future with plastic bag ban