Police in Colorado have named the private security guard who shot dead a man during protests in Denver on Saturday.

Matthew Dolloff, 30, was working for local television station KUSA TV when he shot and killed the man, who maced him.

Dolloff is being detained on suspicion of first degree murder in connection with Saturday afternoon’s shooting, Denver police said in a social media post.

A decision on any charges will be up to the Denver district attorney’s office, police said.

A spokesperson for Beth McCann, the district attorney, said on Sunday that the arrest affidavit in the case remained sealed and referred further questions to the police.

It was uncertain if Dolloff had retained an attorney.

The victim has not been identified by authorities.

A video on Twitter appears to show the conflict leading up to the gunfire. A photographer for The Denver Post captured an image of the altercation as a man sprays a chemical agent at another man with a drawn handgun.

The man who was shot was taken to a nearby hospital, where he died an hour later, NBC News affiliate KUSA TV station said.

Police arrested Dolloff on the spot, and he surrendered immediately.

Photos taken by The Denver Post’s photographer captured Dolloff looking stunned as the man fell to the floor.

“It has been the practice of KUSA for a number of months to hire private security to accompany staff at protests,” the station said.

Denver Police Department chief of investigations, Joe Montoya, said two guns and a can of mace were found at the scene.

The shooting took place at 3.37pm local time in a courtyard at the Denver Art Museum during a “Patriot Rally” that was met by counter-protests by groups calling their rally a “BLM–Antifa Soup Drive”.

Montoya said police kept the two groups separated, and there were no other arrests during the competing rallies. 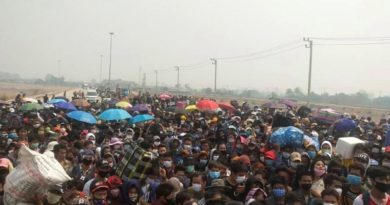