Politicians, legal figures and celebrities have been paying tribute to Ruth Bader Ginsburg, the widely respected Supreme Court Judge who died on Friday at age 87.

Justice Bader Ginsburg’s family confirmed she died at her home in Washington DC from complications from metastatic cancer of the pancreas.

The Associate Justice had served on the court since 1993, when she was appointed by Bill Clinton.

“We at the Supreme Court have lost a cherished colleague. Today we mourn but with confidence that future generations will remember Ruth Bader Ginsburg as we knew her, a tireless and resolute champion of justice.”

Former Democratic presidential candidate Pete Buttigieg said: “Ruth Bader Ginsburg was a titan of justice. Her jurisprudence expanded the rights of all Americans, shaping our lives for the better.

“And her example now shines within the history of our country, there to inspire generations.”

New York state Attorney General Letitia James added: “Ruth Bader Ginsburg was a true American hero, and her legacy will live on in our nation forever.

“We are all heartbroken. May her memory be a blessing.”

California Governor Gavin Newsom said: “We have lost a giant among us. A trailblazer. And a champion of equality and justice.

“Our hearts ache tonight. Let us honour her memory by preserving the very ideals she fought so tirelessly for.

“Justice Ginsburg paved the way for so many women, including me. There will never be another like her. Thank you RBG,” said Hillary Clinton.

Actress Mindy Kaling also paid tribute. “Breaking that ground so hard that the rest of us felt the cracks for years and years after,’ said Ms Kaling.

“During her extraordinary career, this Brooklyn native broke barriers and the letters RBG took on a new meaning – as battle cry and inspiration.

Her legal mind and dedication to justice leave an indelible mark on America.”

“A shock. A sadness. A great loss,” said veteran news anchor Dan Rather.

“The passing of Ruth Bader Ginsburg leaves a hole in a nation already reeling. She is an American hero, in every sense.

“We can honour her by joining to carry forth her legacy of equality, empathy, and justice. May she Rest in Peace.”

Mariah Carey said: “Thank you for a lifetime of service. Thank you for changing history. We will never let it be undone. RIP RBG.”

Jamie Lee Curtis, added: “Thank you for your leadership and service to us all. We are in your debt and we will continue to fight with all our power. Rest in your great power.”

“Laura and I join our fellow Americans in mourning the loss of Ruth Bader Ginsburg,” said Mr Bush.

“She dedicated many of her 87 remarkable years to the pursuit of justice and equality, and she inspired more than one generation of women and girls.

“Justice Ginsburg loved our country and the law. Laura and I are fortunate to have known this smart and humorous trailblazer, and we send our condolences to the Ginsburg family.”

And Mr Carter added: “A powerful legal mind and a staunch advocate for gender equality, she has been a beacon of justice. I was proud to have appointed her to the US Court of Appeals in 1980.

“We join countless Americans in mourning the loss of a truly great woman.”

Donald Trump’s niece, Mary L Trump added: “Take a moment. Breathe. And then we fight for our country the way she always did for us. Or we will lose everything.”

Senator Bernie Sanders said: “The passing of Justice Ruth Bader Ginsburg is a tremendous loss to our country.

“She was an extraordinary champion of justice and equal rights, and will be remembered as one of the great justices in modern American history.”

“May we continue to fight for Justice here with her passion, brilliance and extraordinary mischief. Until good is done.”

Wonder Woman actress Gal Gadot took to Instagram and posted: “Rest in Peace RBG. Thank you for everything you brought to this world.”

Speaker Nancy Pelosi issued her own tribute in which she said: “Tonight, the flags are flying at half staff over the Capitol to honour the patriotism of Justice Ruth Bader Ginsburg.

“Every woman and girl, and therefore every family, in America has benefitted from her brilliance.”

She added: “Her passing is an incalculable loss for our democracy and for all who sacrifice and strive to build a better future for our children.”

In her tribute Representative Alexandria Ocasio-Cortez called for supporters to fight for democracy.

“We have lost a giant in the history of our nation with the passing of Ruth Bader Ginsburg,” she said.

“It is heartbreaking that in her final moments she was, as are many others, preoccupied with what would happen after her passing.

“I want to make one thing clear: we can, and we must, fight.

“Now is not the time for cynicism or hopelessness. There is and continues to be political possibility to preserve our democracy and move forward.

“It will require each and every one of us, from the streets to the Senate, to grow in courage, strength, and strategy. But it is possible.

“Our first priority is to do everything possible to secure electoral college victory in November. This is the fight of and for our lives. That has always been true, and it becomes more true each day.

“Opponents of democracy need your resignation to succeed. Don’t give it to them.”

Actress Kerry Washington tweeted: “Her rest is earned. It is our turn to fight.”

Veep star Julia Louis-Dreyfus added: “If there is a God, may She bless and keep RBG.”

And filmmaker Rob Reiner tweeted: “Today couldn’t be sadder. A brilliant Jurist, Ruth Bader Ginsburg is gone. We must fight not to allow an Impeached Criminal to take her seat.”

Mr Trump made the comments after a rally in northern Minnesota, during which he had been unaware of her death.

“In 2017, I was honoured to attend a lecture by Justice Ruth Bader Ginsburg at @GeorgetownLaw.

“RBG was a pioneer for women and gender equality – graduating law school when there were only 9 female students and then becoming the 2nd woman Supreme Court Justice.”

“On behalf of the Department of Justice, I extend my deepest sympathies on the passing of Justice Ruth Bader Ginsburg,’ said Attorney General William Barr.

“Justice Ginsburg led one of the greatest lives in the history of American law.”

Bill Clinton, who nominated Ms Ginsburg, said: “We have lost one of the most extraordinary Justices ever to serve on the Supreme Court.

“And her powerful dissents reminded us that we walk away from our Constitution’s promise at our peril.” 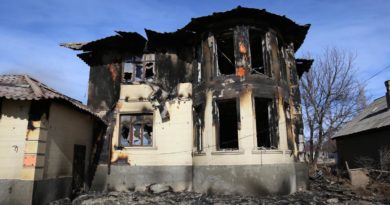 The official Covid-19 mortality figures might be dramatically underestimating the real death toll of the pandemic in the US, according

Poll: The world is worried about the coronavirus. It’s equally concerned about climate change.