A Slovak court on Thursday found a politically connected businessman not guilty of charges that he ordered the murder of investigative journalist Jan Kuciak, a case that shook the nation and brought down longtime premier Robert Fico.

The court convicted another defendant guilty of taking part in the murder but did not find evidence the hit was ordered by businessman Marian Kocner, the main focus of the investigation.

The killing of Mr Kuciak, 27, and his fiancee Martina Kusnirova forced then-prime minister Fico to step down and ushered in a new government in March this year whose main election promise was to clean up corruption and sleaze.

The couple were gunned down in their home outside Bratislava in February 2018, a killing that mirrored the murder in Malta four months earlier of another journalist investigating corruption, Daphne Caruana Galizia.

Bringing Mr Kuciak’s killers to justice has been a test of Slovakia’s judicial and political system, long seen as susceptible to corruption.

“It was not proven that the deed was committed by Marian Kocner and Alena Zsuzsova,” judge Ruzena Sabova said.

Families of the victims left the courtroom right after the verdict on Mr Kocner as the judge kept reading details of the decision.

The court sentenced another defendant, Tomas Szabo, to 25 years in prison for helping carry out the murder.

Two others have already been convicted in the case after admitting guilt. One of them, a former soldier, received 23 years in prison for killing Mr Kuciak and his girlfriend, while a fifth suspect admitted to facilitating the murder and was given a 15-year sentence.

The investigation has forced the resignation of several senior politicians and judicial officials on account of their previous links to Mr Kocner.

Mr Kocner, who is well known in Slovak business and political circles, has already received a 19-year sentence in a separate case after being convicted of forging €69m (£61.5m) euros in promissory notes. He has appealed that decision. 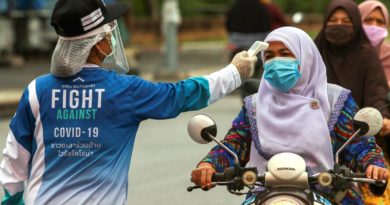 ‘What he did in 2016 was disgraceful’: Pelosi calls on Biden to cancel debates with Trump over president’s ‘skullduggery’ | The Independent

Lost on the frontline: The high price paid by healthcare workers worldwide as coronavirus death toll looks set to pass one million