Polls are beginning to close and early results are trickling in after voters in 14 states have cast their ballots to determine the Democratic contender to take on Donald Trump in November’s presidential election.

With a finally thinning field of contenders, candidate Joe Biden – with the consolidated backing of moderate now-former candidates Amy Klobuchar and Pete Buttigieg, as well as Beto O’Rourke – is facing against Bernie Sanders, Elizabeth Warren and Michael Bloomberg. Bloomberg has insisted he’s staying in the race, hoping to win in a contested convention, amid allegations he’s peeling votes away from Biden, while Warren has blasted the former vice president as a “Washington insider” as Sanders supporters have urged her to leave the race and rally progressives around the Vermont Senator.

Former Democratic nominee Hillary Clinton meanwhile has stood by comments calling Sanders’ campaign “just bologna” on Tuesday, despite his support for her in 2016, as he looks to win big in delegate-rich California and re-assert his frontrunner status.

Joe Biden: ‘They don’t call it Super Tuesday for nothing​’

He told supporters in Los Angeles: “It’s a good night and it’s going to get even better.”

The two men are looking ahead to delegate-heavy Texas and California, where polls are set to close soon despite long lines and heavy voter turnout at polling locations throughout the state.

Mr Sanders is projected to win the state.

After stressing “access to care” and investing in finding cures for cancer, Alzheimers and diabetes, his “standing up to the NRA” and “leading the world taking on the existential threat of climate change”, Mr Biden made repeated appeals to the middle class and attacked Donald Trump, who he says does not possess ” a single sense of empathy, no compassion.”

Speaking from Vermont, where he won his race for Burlington mayor 31 years ago today, Bernie Sanders says his campaign is “absolutely going to win the Democratic nomination, and we are gong to defeat the most dangerous president in the history of this country” as he faced a hometown crowd chanting “Bernie!”

He said the race between him and Joe Biden is a “contrast in ideas” between a senator who opposed the Iraq War (“you’re looking at him”) and another who voted for it, as well as opposing views on cutting Social Security and other issues on which both men are in stark contrast.

Biden has won several states tonight, cementing his lead in the South, as Sanders pursues major victories in delegate-heavy Texas and California.

Bernie Sanders campaign to supporters: ‘Looking forward to a good – if not very long – night’

In a fundraising message to supporters, the Vermont Senator’s campaign – after winning Vermont and Colorado – says the results “will get better and better for our campaign as we get later into the evening.”

The campaign appears to be anticipating a stronger performance from Joe Biden than expected tonight and is bracing itself for states’ primaries in the weeks ahead.

“A number of states we expect to do well in either end later or will get called later. But it’s going to be a good night for us when it’s all said and done.

“Now that the field has narrowed and the financial elite and political establishment have their choice, the outside spending we are going to face will only increase.

“Us against everyone. But that is how the fight for change has always gone in the history of this country. ‘Power concedes nothing without a fight. It never did, and it never will’, as Frederick Douglass said.”

Bernie Sanders has claimed his second victory of the night in Colorado, where he is projected to win the state, which carries 67 delegates.

Michael Bloomberg, meanwhile, is expected to make an announcement about the future of his campaign tomorrow, according to NBC News.

The president twists the knife into Bloomberg, whose multi-million dollar campaign is earning him very little delegates, as Trump shares a video of the former New York mayor sucking on his fingers.

As results trickle in, Michael Bloomberg has won a Super Tuesday election in the only territory he didn’t visit.

After spending more than half a billion dollars on his campaign, the former New York mayor has won… the South Pacific territory of American Samoa, according to the American Samoa Democratic Committee.

Meanwhile, he is set to finish below delegate eligibility in Virginia, where he first held a campaign event.

As Joe Biden begins collecting delegates in early wins, Bernie Sanders’ campaign is betting on California for a big win for the night.

Virginia, North Carolina and Alabama combined have roughly 260 delegates, while California alone has 415 delegates. Texas – where polls just closed – has 228.

Still, the former vice president could win the most delegates tonight.

Electronic voting machines in California have been hit by widespread technical difficulties on Super Tuesday, which have frustrated voters and may delay some results.

Los Angeles County – home to more than 5 million voters – was among the worst-affected, as many took to social media to complain of problems with a new $300 million voting system.

Nearly half of all Super Tuesday voters who didn’t know who they were going to vote for until a few days ago are casting their votes for the former vice president, according to exit polling.

Roughly a quarter of Super Tuesday voters were late deciders.

Joe Biden’s propulsion in early returns in North Carolina appears to have come largely from black voters, who also gave him the surge to victory in South Carolina.

According to early exit polls, roughly 6 in 10 black voters in North Carolina cast their votes for the former vice president.

Bloomberg: ‘Tejas. That’s Spanish for Texas … You’re in a Cuban neighbourhood, so you got to know your audience’

It’s not a day in the 2020 campaign without some cringe from one of the campaigns.

Watch Michael Bloomberg insist that Texas is pronounced “Tejas” while on the trail in Miami.

Bloomberg spending big in every state ahead of Super Tuesday

Michael Bloomberg has spent more on advertising than all other candidates combined ahead of Super Tuesday, barely making a dent in his billions with a $560m sum spent on campaign adverts.

He’s hoping to make a big debut on Super Tuesday ballots and has bought airtime in every single state. He spent more than $77m in California alone.

Tom Steyer came in second, with $260m, just half of what Bloomberg has spent. Steyer dropped out on Saturday night.

Joe Biden doesn’t support Bernie Sanders’ Medicare for All, but his support for marijuana legalisation – increasingly popular with Americans – is less clear.
Report: Bloomberg urged to drop out, but mayor says ‘only way’ to win is at contested convention

Following reports that his own campaign wanted him to drop out and endorse Joe Biden, throwing the weight of his seemingly infinite pool of money into the nominee, Michael Bloomberg says no, he’s not doing that.

Vanity Fair quoted four sources privy to internal Bloomberg campaign conversations urging the billionaire to end his campaign and back Biden in an effort to edge Bernie Sanders out of the race.
But the former New York mayor told reporters in Miami that “the only way” he believes he can win is at a contested Democratic convention, in which no candidate has a clear majority of delegate votes to earn the nomination.

One source told Vanity Fair that Bloomberg is “looking at the numbers thinking, ‘I’ll be damned if I walk away before a single vote is cast for me.””

Sanders campaign says it will not push Warren to drop out

Bernie Sanders’ campaign said today it would not pressure progressive rival Elizabeth Warren to drop out of the Democratic primary race.

Campaign manager Faiz Shakir told CNN that there had been no attempts to convince the Massachusetts senator to withdraw in order to strengthen Sanders’ bid, as the Democratic Party’s centrist candidates have done for Joe Biden in recent days.

“She has been campaigning very hard, has raised a lot of money and has earned a lot of votes,” Shakir said. “She should be given the time and space to decide for herself about the future of her campaign.”

Almost $1m has been spent on political adverts attacking Bernie Sanders by a group not legally required to reveal its donors, it has been reported.

A number of polling stations in Tennessee will remain open for at least an extra hour after a tornado damaged more than a dozen voting places.

The extreme weather, which killed at least 22 people and left a path of destruction, caused a number of polling stations to open late on Super Tuesday, which led to long lines elsewhere and meant some people were turned away without voting.

Tulsi Gabbard called Elizabeth Warren a “fake indigenous woman of color” after a guest on FOX News mistakenly referred to Warren as the only woman left in the Democratic primary race.

The tweet came in response to a segment in which former White House deputy chief of staff and Republican strategist Karl Rove questioned whether Warren would benefit from the departure of Amy Klobuchar from the race.

Gabbard is currently the worst-performing candidate still in the race, polling between 1-3 percent.

Joe Biden said his hopes were high during a campaign stop in California, just hours away from the first Super Tuesday results.

“My hopes are high… I think we’ll do well on Super Tuesday,” he said, according to Politico. “I think we’ll qualify here, we’ll beat the threshold.”

Asked about his chances while he worked the crowd at an Oakland diner, the former vice president said he was “going to do fine.”

Biden has climbed in the polls in recent days, closing the gap on Bernie Sanders in California. 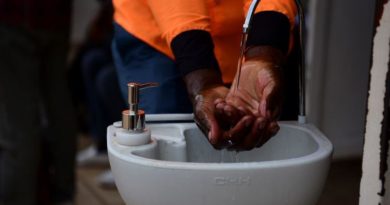