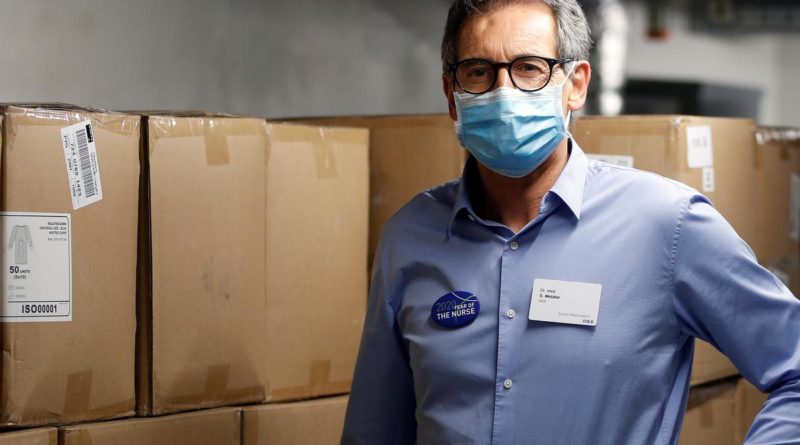 MAENNEDORF, Switzerland (Reuters) – Love led a young Swiss doctor to emigrate to South Africa, his wife’s home country. Years later, love for his disabled child brought him back to Switzerland.

Swiss doctor Stefan Metzker stands beside boxes containing personal protective equipment (PPE) during an interview with Reuters, amid the spread of the coronavirus disease (COVID-19) at the Spital Maennedorf hospital in Maennedorf, Switzerland May 12, 2020. Picture taken May 12, 2020. REUTERS/Arnd Wiegmann

The know-how Stefan Metzker gained on his journey – first as a Cape Town intensive care specialist, then supplying African doctors with Chinese-made surgical scrubs and now as a Swiss hospital CEO – prepared him to help when COVID-19 struck.

Answering a call from Zurich officials desperate for face masks, surgical gowns and gloves, Metzker leveraged a Chinese business contact he had forged decades ago to secure 23 million items of medical gear.

Since April, passenger-turned-cargo jets belonging to Lufthansa unit Swiss Air Lines have made 15 non-stop flights from Shanghai to Zurich.

The 16th and final flight, with the last of what amounted to 230 tons of equipment, is due later this month.

“I wouldn’t have recommended it if I hadn’t known the people in China for years through my activities in South Africa,” Metzker, 59, told Reuters.

“Based on trust, and the long relationship I had, it was possible to pay up front. That allowed us to secure large volumes at reasonable prices, at a time when raw materials were extremely scarce.”

The air bridge Metzker helped organise underscores how people far from the limelight have also tapped their experience to make a difference.

After apartheid’s collapse, Metzker and his wife, Christine, left Switzerland in 1995 for Cape Town’s Tygerberg Hospital, for a job treating intensive care patients.

There, he watched aghast as surgeons clad only in traditional cotton scrubs became soaked with blood of patients, many of whom had AIDS.

“We developed a fabric to protect us against blood and body fluids,” Metzker said. “Through this business, I made relationships with international suppliers.”

In 2009, however, Metzker’s family returned to Switzerland so his son, who has a severe neurological disease, could safely attend school in his electric wheelchair. Metzker took a job as CEO of Spital Maennedorf, a 150-bed, 950-employee hospital on Lake Zurich.

As COVID-19 rolled over Switzerland in February and March, officials in Zurich feared a three-month protective equipment supply in the nation’s emergency stockpile would not last.

With nations everywhere clamoring for equipment, Zurich’s government pharmacy put out an all-points bulletin, asking for help from anybody who could get their hands on masks, gloves and scrubs.

“I thought to myself, “Oh, man! It can’t be that a country like Switzerland is heading toward a disaster without the protective material we need,” he said.

A sudden change in Chinese regulations stalled one early April shipment at Shanghai customs before the Swiss consulate in China intervened to finally get the plane aloft, the Swiss Foreign Ministry said.

Zurich officials acknowledged Metzker’s role in the deliveries but did not comment on details including their cost. Metzker said the regional government reacted swiftly, paying in advance after he reassured them the Chinese supplies would come through.

Zurich opted to have gear shipped directly from Shanghai, not via another country, for fear other governments might seize it. Germany accused the United States of “modern piracy” in early April in a case of masks diverted from an airport in Bangkok.

There was another reason for haste: Prices were rising as demand skyrocketed. A surgical gown he bought for less than $2 now costs about $8, Metzker said.

Metzker’s hospital doubled the number of ICU beds with ventilators to 12, though they were never completely filled.

Still, he said, it was “mind-blowing” just how much protective equipment was needed, with doctors and nurses discarding layer after layer every shift.

With Zurich-area hospitals’ shelves now stocked and COVID-19 infections waning, Metzker believes they are prepared should the virus flare up again, which some fear as Switzerland joins other countries in gradually relaxing restrictions.

“We probably could even afford the luxury of shipping by sea or by train in the future,” Metzker said. “We’re ready for a second wave, if there is one.”

After Weeks of Declining Vaccination Rates in the U.S., They Went Back Up in June. Will the Momentum Last? 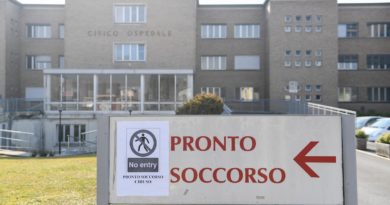