Donald Trump has demanded the extradition of Christopher Steele, the British former MI6 officer who wrote an infamous report into the US president’s connections with Russia.

In a Saturday morning tweet the president said: “This man should be extradited, tried, and thrown into jail. A sick lier [sic] who was paid by Crooked Hillary & the DNC!”

He was retweeting a report from Just The News regarding a British court ruling that Mr Steele had violated a data privacy law by failing to check information in his infamous dossier on Mr Trump’s Russia connections.

The president retweeted a number of posts from John Solomon, ostensibly promoting the investigative journalist’s forthcoming book, arguing that he should have won a Pulitzer for “exposing Russia, Russia, Russia as Fake News”.

On Wednesday a British judge ordered Mr Steele to pay damages of $23,000 each to two Russian businessmen that he said had made payoffs to Vladimir Putin in the 1990s.

Judge Mark Warby said that Mr Steele had not take reasonable steps to verify the allegation.

He had accused Petr Aven and Mikhail Fridman of facilitating the transfer of large amounts of money to Mr Putin when he was deputy mayor of St Petersburg.

In addition to Mr Steele and Russia, the stream of tweets touched on a number of other topics at the forefront of the president’s mind.

Related to the Russia investigation, he tweeted: “New documents just released reveal General Flynn was telling the truth, and the FBI knew it!” tagging One America News Network.

In addition he he accused the New York Times of making up the Russia bounty story, saying: “This was just another phony hit job by the @nytimes. They had no source, they made it up. FAKE NEWS!”

On commuting Roger Stone’s sentence he said: “Roger Stone was targeted by an illegal Witch Hunt that never should have taken place. It is the other side that are criminals, including Biden and Obama, who spied on my campaign – AND GOT CAUGHT!”

He congratulated Attorney General William Barr on a new federal crackdown on violent crime in US cities, while urging Alabama voters to choose his former attorney general’s opponent in Tuesday’s election, calling Jeff Sessions “a disaster”.

In reference to Kanye West’s announcement that he is running for president and the theory that he might siphon black votes from Joe Biden, Trump wrote: “That shouldn’t be hard. Corrupt Joe has done nothing good for Black people!”

He again pushed for the reopening of schools, referencing a report that argued keeping them closed was a greater public health risk, and decried the failures of virtual learning.

In response to a report that Nancy Pelosi won’t release her tax returns unless she decides to run for president, he wrote “So cute!” 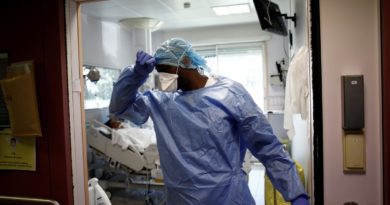 SpaceX return: How Nasa astronauts’ splashdown has changed the future of space travel