Analysis by Reuters shows that the president improved his share of the vote by four per cent over his performance in the 2016 election in these districts, rising to 54.1 per cent from 50.1 per cent.

Reuters looked at 220 counties where 95 per cent of the votes have been counted.

Mr Trump also won states with some of the highest death tolls from the virus, including Florida and Texas, that either had lax or slow responses to Covid-19, or reopened too quickly leading to a surge in cases.

The prominence of the pandemic in the election, both as a campaign issue and because of the logistical challenges it presented to both voters and candidates, is one of the defining features of the 2020 electoral cycle.

Joe Biden’s campaign made the response of the Trump administration to the coronavirus a central part of its message — particularly the appalling number of fatalities across the country.

The Trump campaign focused on the economic implications of locking down the country, with the president continually minimising the severity of the disease, demanding that state governors reopen their economies, later repeating that the US was “rounding a corner” towards the end of the pandemic.

While the Biden team cancelled in-person events and door-to-door campaigning to prevent the spread of the virus, the Trump campaign keenly restarted its rallies — after a two month pause — with scant attention paid to social distancing and mask-wearing.

Widely referred to as superspreader events, research has directly linked spikes in cases of coronavirus to the weeks after a local Trump rally.

Health officials in Minnesota were able to trace two dozen cases to campaign events. The same trend was documented in Minnesota, Pennsylvania, and Wisconsin, with a study saying that rallies led to 30,000 extra cases.

Even after contracting Covid-19 himself in October, the president continued to downplay its severity and ignored advice on mask wearing to stop the spread of the disease.

And therein lies a potential explanation for the president doing better in counties in which the death toll from the virus was higher — they may also be home to some of his more enthusiastic supporters.

Campaign events continued right up to the election, with the president doing up to five events a day in five separate states.

On Wednesday the US surpassed 100,000 new cases of coronavirus in a day — the largest amount recorded since the beginning of the pandemic. 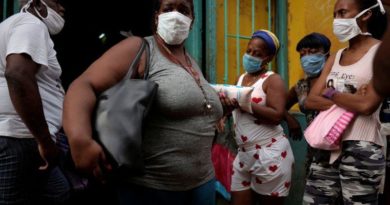