Donald Trump’s legal team has been derided for its shambolic performance in the president’s Senate impeachment trial as both sides took questions from senators, with Pam Bondi fluffing her lines and Alan Dershowitz attempting to argue that no action carried out in the course of seeking re-election is impeachable because a stable administration is in the best interests of the public.

“If the president does something that he thinks will help him get elected, in the public interest, that cannot be the kind of quid pro quo that results in impeachment,” said celebrity Harvard University professor Dershowitz.

The point was dismissed as “very odd” by lead impeachment manager Adam Schiff while Senate minority leader Chuck Schumer said his arguments “make just no sense” and Oregon’s Jeff Merkley laughed them off as “absolutely incredible” on CNN.

On MSNBC, Rachel Maddow and panellists were even less charitable:

And that wasn’t all: over the course of the marathon Q&A session, another Tump lawyer, Patrick Philbin, argued: “the idea that any information that happens to come from overseas is necessarily campaign interference is a mistake.”

“That’s non sequitur. Information that is credible that potentially shows wrongdoing by someone who happens to be running for office, if it’s credible information, is relevant information to the voters to know about.”

Responding to Philbin, Democrat Mark Warner, vice chairman of the Senate Intelligence Committee that has tirelessly pursued the question of Russian election hacking in 2016, said Philbin’s argument “contradicts everything that our committee has said, everything the intelligence community has worked on.”

“If Mr Philbin’s argument is accepted at face value that foreign interference is okay unless it violates some non-defined definition of a campaign contribution [is] counter to everything that the intelligence community, our committee and I think others are working on.”

“I have never heard anyone represent anything close to that in the intelligence community ever,” agreed New Mexico Democrat Martin Heinrich.

“We are encouraged to at all times report even just contact with foreign efforts at interference in our elections or of manipulation of our government activities.”

Stephen Miller once said fighting immigration was all he cared about: ‘I don’t have anything else. This is my life’ 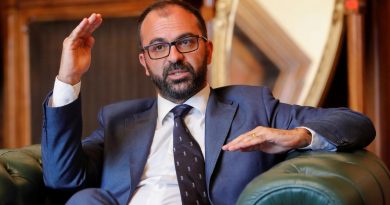 Italy education minister resigns over lack of funds for ministry