In a speech to evangelical leaders, Donald Trump joined other in praying for himself before launching into a speech that lurched from vehement lamentations of his purported grievances to a listing of his favourite Fox News personalities.

During the speech, Mr Trump prodded the assembled media in the back of the El Rey Jesus International Ministry in Miami, saying he likes to rile people up by suggesting he might violate the US Constitution and stay in office longer than two terms.

“I say 12 years? 16 years? It drives them crazy. But they drive us a little crazy, so we’re even,” the president said, motioning to the press as the assembled “Evangelicals for Trump” crowd cheered.

He then claimed – without providing evidence – that the media was colluding with the Democratic Party against him, before naming several right-wing media figures he does likes.

“Think of it, we’ve done this without the media. So we’ve had one party totally against us, and their partner is the fake news. And we won. But we have great people – rush just signed another four year contract, he just wants four more years, ok? Rush. Sean Hannity, Laura [Ingraham] — a lot of great people. Tucker [Carlson’s] been great,” he said.

The speech came just a day after Mr Trump approved a targeted air strike that killed Iranian general Qasem Soleimani, and as he faces the threat of a hearing in the Senate after a vote last year in the House to impeach him.

During the prayer at the start of his appearance in Miami, the pastor praised Mr Trump for his record.

He touched upon the president’s changes to food stamp rules that critics say could cut benefits to around 700,000 Americans, saying that Mr Trump has taken millions off of the benefits and shown them the “dignity of work”.

The pastor also prayed thanking God that the president “doesn’t claim to be perfect”, even though Mr Trump has suggested several times that he is the “chosen one”.

He went on to praise Mr Trump for his positions against abortion, just as the Supreme Court is set to consider challenges to abortion restrictions in Louisiana — which, with two new conservative Trump-additions to the bench, could result in a major blow to abortion rights in the US. 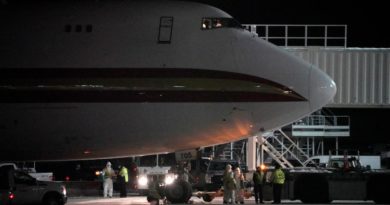