Donald Trump‘s press secretary said the president always intends to give truthful information as he prepares to sign an executive order against social media tech giants.

Kayleigh McEnany said if anyone should be fact-checked more it should be the mainstream media.

“I’m around the president, his intent is always to give truthful information to the American people,” she said during a press briefing today.

Ahead of an expected executive order on social media, Ms McEnany said that Twitter put a false, inaccurate fact check on the president’s tweets.

“The deputy chief of staff here was the first user in the history of Twitter to receive a so-called, quote ‘manipulated media’ label, for posting a video that played a verbatim clip,” she said.

“It is no coincidences that these two unbelievable interventions by Twitter were targeted against the president of the United States and one of the president’s top advisers.”

“There are various shields in place that essentially shield some of these social media companies and allow them to censor conservative users and we’re not able to see what happens behind those shields,” Ms McEnany said.

“We’re looking at ways to remove some of those shields to shed some light on what is happening and some of the decision making behind the scenes.”

Ms McEnany pointed to inaccurate tweets from Twitter’s top employees that had not received misleading media or fact-checking labels as a sign of bias at the company.

“Twitter’s head of site integrity has tweeted that there are, quote, ‘actual Nazis in the White House’, and no fact check label was ever applied to this absolutely outrageous offensive and false claim made against the White House and its employees,” she said. 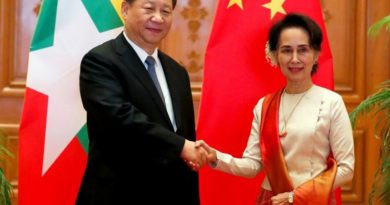