President Donald Trump has said the US will not pay for Prince Harry and Meghan Markle‘s security detail after the couple reportedly decided to move from Canada to California.

“I am a great friend and admirer of the Queen & the United Kingdom. It was reported that Harry and Meghan, who left the Kingdom, would reside permanently in Canada. Now they have left Canada for the US however, the US will not pay for their security protection. They must pay,” Mr Trump wrote in a tweet on Sunday.

The US and UK have a longstanding agreement between the two countries to provide security protection to diplomats and members of the Royal Family when visiting the country. But sources said Prince Harry might lose this benefit after he and his wife decided to step down as senior Royals, making them no longer “international protected persons”.

Mr Trump confirmed on Sunday the US had no intention of providing protection while the family lives in the country.

But the president did not say if Prince Harry asked for the protection to be extended to his family after they decided to move from Canada to Los Angeles. The Independent contacted the Royal Family for a comment.

The couple announced earlier this year they would be moving away from the UK and stepping away from their royal duties, an announcement that caused a stir throughout the Royal Family. Initially Prince Harry and Ms Markle planned to settle down in Canada with their 10-month-old son, Archie.

Canada reportedly paid for the their security detail starting in November, but officials said they would stop paying for the protection after March once their royal duties ended.

“The Duke and Duchess of Sussex choosing to relocate to Canada on a part-time basis presented our government with a unique and unprecedented set of circumstances,” Canada’s Public Safety Minister Bill Blair’s office wrote in a statement, according to CBC. “The RCMP has been engaged with officials in the U.K. from the very beginning regarding security considerations.

“As the Duke and Duchess are currently recognised as Internationally Protected Persons, Canada has an obligation to provide security assistance on an as-needed basis. At the request of the Metropolitan Police, the RCMP has been providing assistance to the Met since the arrival of the Duke and Duchess to Canada intermittently since November 2019. The assistance will cease in the coming weeks, in keeping with their change in status.”

Prime Minister Justin Trudeau previously said “discussion were ongoing” with the UK about how security protection would be paid for while the family was in Canada.

But reports indicated Prince Harry and Meghan Markle will plan to spend more time in California, where they currently reside during the coronavirus pandemic, letting Canada off the hook for paying security fees. Ms Markle’s mother, Doria Ragland, lives in Los Angeles.

The couple’s royal status officially ends on 31 March, but they attended their last event under their titles earlier this month at the annual Commonwealth Service at Westminster Abbey. They have not detailed what their schedule will entail instead of their royal duties. 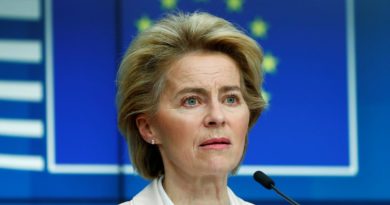 EU disapproves of U.S. travel ban, ‘taken unilaterally and without’

Why German Chancellor Angela Merkel’s successor turned in her resignation