US president Donald Trump has said he will ban the popular video app Tiktok over security concerns.

The app’s Chinese ownership has raised concerns about the censorship of videos, including those critical of the Chinese government, and the potential for sharing user data with Chinese officials.

Mr Trump said a ban could be implemented on Saturday. On Friday he said he could use emergency economic powers or an executive order to enforce the action, insisting, “I have that authority” before adding: “It’s going to be signed tomorrow.”

The move comes after India‘s government banned a series of apps, including Tiktok, amid claims some of them are using data illegally, and secretly collecting information from people’s phones when they are downloaded.

Revenue at President Donald Trump’s Washington DC hotel and several of his biggest clubs and resorts mostly held steady last year before the coronavirus forced many to shut their doors and lay off workers, according to a financial disclosure report released Friday.

Mr Trump’s DC hotel and his Mar-a-Lago club in Palm Beach, Florida, both took in slightly less revenue in 2019 for the third year in a row. Revenue at the president’s golf club near Miami and at his Bedminster, New Jersey, golf club inched up.

In sum, the disclosure report released by the Office of Government Ethics appears to provide little evidence that Mr Trump’s role as president has provided a big boost to his business, as his critics had feared.

The White House and its Republican Party allies appear to be retreating from their opposition to a $600-per-week supplemental unemployment benefit that has propped up the economy and family budgets but expired Friday.

President Donald Trump is eager to extend the benefit, undercutting his GOP allies on Capitol Hill who have spent considerable effort devising an alternative that could unite Republicans.

The unemployment insurance is a principal element as talks continue on a Covid-19 relief bill, which is expected to grow considerably from a $1 trillion-plus GOP draft released this week. Top Democrats announced a meeting with administration representatives for Saturday morning after Thursday night talks at the Capitol failed to produce a breakthrough.

The two sides took their case to the media Friday morning, with White House chief of staff Mark Meadows speaking to reporters on short notice at the exact moment House Speaker Nancy Pelosi appeared at her weekly news conference.

Mr Meadows accused Democrats of refusing to negotiate, saying Mr Trump has instructed him to be “aggressive and forward-leaning” in trying to extend the supplemental jobless benefit.

Presumptive Democratic Party nominee Joe Biden is getting closer to naming the woman who would serve as his vice president if he wins November’s US election.

His campaign has not set a date for the announcement and there is still time for the contenders and their advocates to make appeals to Mr Biden, who is 77 and would be the oldest person elected president if he wins the race to the Oval Office.

Mr Biden, who himself served as vice president to Barack Obama, had initially indicated in May he would make a decision around August 1 but campaign sources now suggest a decision could come in the week starting on August 10.

That is one week before the party convention formalises Mr Biden’s nomination to challenge President Donald Trump for the keys to the White House.

Running mates are often announced on the eve of a convention.

President Donald Trump said he will take action as soon as Saturday to ban TikTok, a popular Chinese-owned video app which has become a source of national security and censorship concerns.

Trump’s comments came after published reports that his administration is planning to order China’s ByteDance to sell TikTok. There were also reports on Friday that software giant Microsoft is in talks to buy the app.

“As far as TikTok is concerned, we’re banning them from the United States,” Trump told reporters Friday on Air Force One as he returned from Florida.

Trump said he could use emergency economic powers or an executive order to enforce the action, insisting, “I have that authority.” He added, “It’s going to be signed tomorrow.” 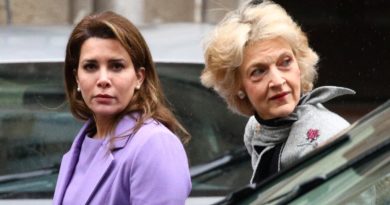 Princess Haya: I feared Dubai ruler would abduct my kids