Los Angeles has become a new epicentre in the pandemic as coronavirus cases and hospitalisations surge there despite governor Gavin Newsom’s strict orders requiring bars to close and residents to wear masks in nearly all public spaces.

“The alarming increases in cases, positivity rates and hospitalisations signals that we, as a community, need to take immediate action to slow the spread of Covid-19,” Barbara Ferrer, director of public health for Los Angeles County, said in a statement announcing the sharp rise. “Otherwise, we are quickly moving toward overwhelming our healthcare system and seeing even more devastating illness and death.”

Los Angeles County said its beaches will be closed for the Independence Day weekend and fireworks displays will be banned.

Statewide positive tests for Covid-19 rose by at least 7,418 in California on Monday to nearly 223,000, the biggest one-day increase since tracking began.

California is among a number of states including Florida, Texas and Arizona battling a new wave of infections as the nation emerges from weeks of lockdown. Covid-19 infections in Texas rose by 6,545 on Monday to nearly 160,000, also setting a record for a one-day increase.

Nationally, cases rose by more than 40,000, for the fourth time in the past five days.

Arizona governor Doug Ducey has meanwhile ordered the closure of bars, nightclubs, gyms, movie theaters and water parks for at least 30 days. Ducey also delayed the start of public schools until at least 17 August. “Our expectation is that next week our numbers will be worse,” Ducey said at an afternoon news conference.

Trump’s vice president Mike Pence will travel to Phoenix on Wednesday to discuss efforts to fight the pandemic’s resurgence. 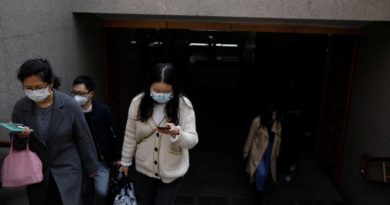 Coronavirus: Hospital workers ‘wearing adult diapers because they do not have time to go to the bathroom