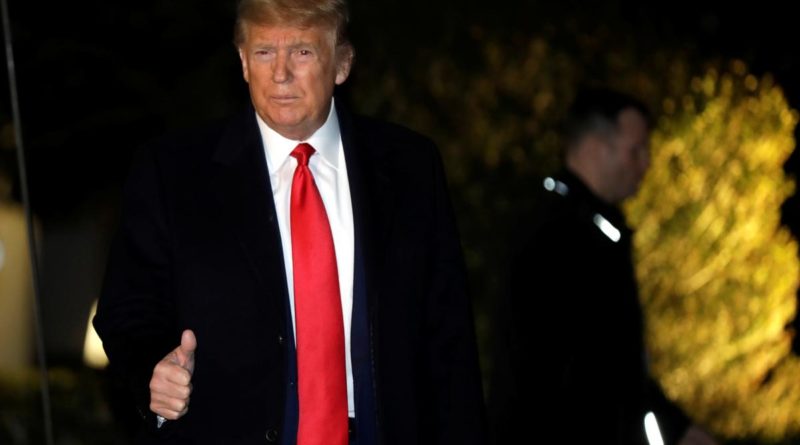 WASHINGTON (Reuters) – Donald Trump’s impeachment trial begins in earnest in the Senate on Tuesday in a rare use of the constitutional mechanism for ousting a president that has only deepened the polarization of U.S. voters ahead of presidential elections in November.

FILE PHOTO: U.S. President Donald Trump thumbs up to the media on the South Lawn of the White House in Washington, U.S., before his departure to Davos, January 20, 2020. REUTERS/Yuri Gripas

Democrats have called on the Senate to remove the Republican president from office, describing him as a danger to American democracy and national security. Trump and his lawyers have decried his impeachment, saying he has done nothing wrong and that Democrats are simply trying to stop him from being re-elected.

The televised trial is expected to hear opening arguments in the Republican-controlled Senate this week, and votes could take place as early as Tuesday on the rules governing the trial. This would include deciding whether the Senate should at a later date consider subpoenas for witnesses, such as Trump’s former national security adviser John Bolton.

The chamber’s 100 members must decide whether to convict Trump on charges approved by the Democratic-led House of Representatives on Dec. 18, accusing him of abuse of power and obstruction of Congress arising from his dealings with Ukraine.

“If the Senate permits President Trump to remain in office, he and future leaders would be emboldened to welcome, and even enlist, foreign interference in elections for years to come,” Democrats wrote in a pre-trial document over the weekend, making the case for his removal.

Trump’s legal team, in their pre-trial brief on Monday, accused Democrats of using impeachment as a “partisan, election-year political tool” and said the Senate should move speedily to acquit him.

The trial of a U.S. president should be a moment freighted with drama, huge political risk and the potential unraveling of a presidency. But financial markets have shrugged it off, and the revelations in the months-long impeachment investigation thus far have done little to boost anti-Trump sentiment among undecided voters or shift away moderate Republican voters.

Indeed, Trump has sought to rally his base with the impeachment issue, fund-raising off it and at raucous election rallies painting himself as the victim of a witch hunt.

Proceedings are due to start at around 1 p.m. (1800 GMT) and the trial is expected to continue six days a week, Monday through Saturday, until at least the end of January.

Opening arguments could last for four days and run well into the night, with a team of Democratic House lawmakers presenting the case against Trump, and the president’s legal team responding.

This is only the third impeachment trial in U.S. history. No president has ever been removed through impeachment, a mechanism the nation’s founders – worried about a monarch on American soil – devised to oust a president for “treason, bribery or other high crimes and misdemeanors.”

With a two-thirds majority needed in the Senate to remove Trump from office, he is almost certain to be acquitted by fellow Republicans in the chamber. But the impact of the trial on his re-election bid is far from clear.

Trump’s request to Ukrainian President Volodymyr Zelenskiy last July to investigate Biden is at the heart of the impeachment case. Democrats accuse Trump of pressuring a vulnerable ally to interfere in U.S. elections at the expense of American national security. Trump’s legal team says there was no pressure and that the Democrats’ case is based on hearsay.

Televised congressional testimony from a parade of current and former officials who spoke of a coordinated effort to pressure Ukraine to investigate Biden has done little to change support for and against Trump’s impeachment. Reuters/Ipsos polling since the inquiry began in September shows Democrats and Republicans responding largely along party lines.

According to a Reuters/Ipsos opinion poll conducted Jan. 13-14, 39% of U.S. adults approved of Trump’s job performance, while 56% disapproved. It also found that 45% of respondents said Trump should be removed from office, while 31% said the impeachment charges should be dismissed.

As the impeachment drama plays out, it has consumed much of Trump’s attention even as the United States faces a series of international challenges.

These include tensions with Iran that nearly boiled over into open war, an on-again, off-again trade war with China, Trump’s so-far failed outreach to North Korea, concerns about a repeat of Russian interference in a U.S. election and strains with traditional allies in Europe and elsewhere.

Trump will be at the annual gathering of world business leaders in Davos, Switzerland on Tuesday to project an air of business as usual and tout the strength of the U.S. economy.

Trump, 73, has gone through a succession of controversies since taking office in January 2017.

House Speaker Nancy Pelosi launched the impeachment inquiry in September. She had previously resisted pressure from her party’s left flank to take the step after then Special Counsel Robert Mueller spelled out instances in which Trump sought to impede the federal inquiry that documented 2016 Russian election interference to boost Trump’s candidacy but found insufficient evidence of a criminal conspiracy.

A pivotal event in the impeachment case is Trump’s July 25 call to Zelenskiy asking Ukraine’s president to investigate Biden and his son Hunter, as well as a discredited theory that Ukraine, not Russia, meddled in the 2016 election.

Hunter Biden had joined the board of Ukrainian energy company Burisma while his father was vice president. Trump has accused the Bidens of corruption without offering evidence. They have denied wrongdoing.

Democrats said Trump abused his power by initially withholding $391 million in Ukraine security aid intended to combat Russia-backed separatists, and a coveted White House meeting for Zelenskiy, to pressure Ukraine to announce the investigations into the Bidens. Trump’s legal team say there is no evidence he conditioned the aid on getting that help.

The obstruction of Congress charge relates to Trump directing administration officials and agencies not to comply with House subpoenas for testimony and documents related to impeachment.

GRAPHIC: How Trump’s impeachment timeline compares to past processes – here 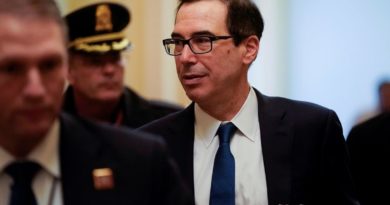 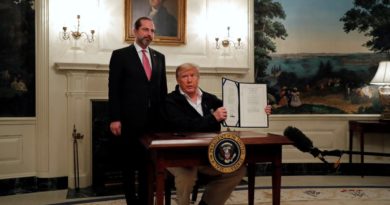 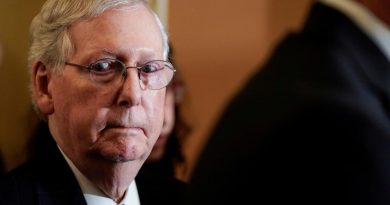