TAIPEI (Reuters) – A U.S. warship has again sailed through the sensitive Taiwan Strait, Taiwan’s Defence Ministry said on Friday, the second time in a month amid heighten tension between Taiwan and China and as a Chinese aircraft carrier passes near the island.

China, which considers Taiwan its own, has been angered by the Trump administration’s stepped-up support for the island, such as more arms sales, U.S. patrols near it and a visit to Washington by Vice President-elect William Lai in February.

Taiwan’s Defence Ministry said the U.S. warship had transited the narrow Taiwan Strait that separates the island from its giant neighbor China in a southerly direction and was continuing to sail south.

Taiwan’s armed forces monitored the ship which it described as being on an “ordinary mission”, the ministry added, without providing further details.

Two weeks ago a U.S. Navy guided-missile destroyer also sailed through the strait, on the same day that Chinese fighter jets drilled in waters close to the democratically-ruled island.

Taiwan said on Thursday that a Chinese aircraft carrier group had sailed to its south through the Bashi Channel that sits between Taiwan and the Philippines and was heading east.

The carrier group earlier this month sailed down Taiwan’s east coast. China said at the time it was on its way to routine exercises in the disputed South China Sea.

China has carried out frequent drills near Taiwan in recent months, including flying fighter jets and nuclear-capable bombers close to the island, in moves denounced by Taipei’s government as attempts at intimidation. 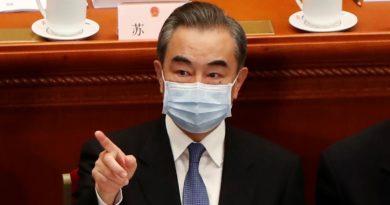