The UK government is under increasing pressure to intervene after Bahrain‘s highest court upheld death sentences handed down to two pro-democracy activists, whom human rights groups say were convicted based on confessions extracted through torture.

On Monday the Court of Cassation upheld the convictions of Mohammed Ramadhan, a 37-year-old father of three and airport security guard, and Husain Mousa, 34, a hotel driver, who were convicted in 2014 over the killing of a police officer in a bomb attack that year.

However, Amnesty International and a UK-based pro-opposition activist group, the Bahrain Institute for Rights and Democracy (Bird), say both men were tortured to extract false confessions, and were subjected to beatings, sleep deprivation and other abuses.

Under mounting international pressure, the allegations were initially investigated by two Bahraini security bodies that have been funded and supported by the UK government.

But the agencies – the Special Investigations Unit (SIU) and the prisons ombudsman – dropped the case, allowing the prosecution against the activists to proceed.

The probe by the SIU and the ombudsman, which have received millions of pounds-worth of training paid for by UK taxpayers, was denounced by independent experts at the International Rehabilitation Council for Torture Victims as “seriously flawed” because it overlooked what the body said was clear medical evidence of abuse.

All legal options are now exhausted, and both men are at risk of execution without notice. In previous cases, the condemned have faced the firing squad.

“Today’s verdict is yet another dark stain in the struggle for human rights in Bahrain … This horrendous injustice could not have happened without the tacit acceptance of Bahrain’s western allies,” Sayed Ahmed Alwadaei, director of advocacy at Bird, said in a statement.

Ahead of Monday’s decision, 46 MPs and peers signed an open letter calling on the UK government to urgently intervene in the case.

“The UK government has consistently failed to criticise due process violations in their trial or acknowledge abuses Mohammed and Husain have suffered. Just last week, the Foreign Office said it ‘welcomed’ the work of SIU and [the ombudsman],” the letter reads.

“The persistence of torture and the significant rise in the use of the death penalty since 2017 in Bahrain show that this soft-touch approach has not worked, and a further 10 inmates are at imminent risk of execution.”

On Thursday, Sir Peter Bottomley MP, the father of the house, raised the issue in parliament, asking foreign secretary Dominic Raab whether he would “use the UK’s constructive dialogue” with Bahrain to publicly raise the cases of these men and exert pressure. James Cleverly, the Middle East minister, responded: ”I can assure the House that our efforts to raise these cases, and also the broader issues of the use of capital punishment, with the Bahraini authorities will continue.”

In 2016, Liberal Democrat MP Tom Brake accused the Foreign Office of “covering up” the allegations of abuse after then-minister Tobias Ellwood told the Commons Bahrain’s ombudsman had “confirmed” there had been “no allegations of mistreatment or torture”. The Foreign Office was repeatedly presented with evidence suggesting that was incorrect by human rights groups, Buzzfeed News reported.

Asked for comment on the case, the Foreign Office directed The Independent to a statement in parliament last week by Department for International Trade minister Lord Tariq Ahmad, who said the government remained “deeply concerned” about the death sentences, and that Bahrain was “fully aware” the UK opposes capital punishment.

Maya Foa, director of rights group Reprieve, said: “It beggars belief that the government is behaving as if nothing has changed today, when it is so deeply implicated in the death sentences of two fathers brutally tortured by the Bahraini regime. British taxpayers supported the SIU that whitewashed Mohammed and Husain’s torture.”

Mr Ramadhan and Mr Mousa participated in the pro-democracy protest of 2011 before their arrest three years later over the bombing in al-Deir, a village northeast of Manama. They have said they were stripped in detention, lashed with plastic pipes and forced to listen to the screams of other inmates being tortured for days. Mr Mousa said his genitals were kicked and beaten until he “confessed” to the killing.

Although Mr Mousa recanted his confession at trial, saying it was coerced, the court relied on it to sentence both him and his co-defendant Mr Ramadhan to death.

Bahrain’s use of the death penalty and torture has soared at “an alarming” rate over the last few years, according to Reprieve. Bahrain denies all allegations of torture made against it.

Since 2012, Reprieve says, the UK government has delivered more £6.5m worth of technical assistance to Bahrain’s justice and security sectors. The London-based rights group added that the agencies involved are not capable of carrying out torture investigations, allowing Bahrain’s courts to continue sentencing citizens to death on the basis of coerced confessions.

Repreive said in the 60 years prior to 2017, Bahrain carried out only 10 executions, with no executions between 2010 and 2017. In the three years since Bahrain lifted a de-facto moratorium on executions, it has carried out six, some of which have been described by the UN special rapporteur on executions as “extrajudicial killings”.

Five of the six victims were executed on the basis of torture-tainted confessions, according to Reprieve – an allegation Bahrain denies.

Currently, according to Bird, 26 people are on death row in Bahrain.

“The terror of knowing that my husband can be executed by firing squad at any moment without proper notice is tearing me apart,” Mr Ramadhan’s wife, Zainab Ebrahim, tweeted after the sentence on Monday.

She also said she had been barred from entering the courtroom to attend her husband’s hearing.

Bahrain’s government said the case met all requirements of a fair trial, and that the initial judgment was followed by a second trial that looked into the allegations of abuse.

“Each of the defendants had an attorney present with him throughout all the stages of the trial,” said Haroon Al Zayani, head of the public prosecutor’s technical bureau, in a statement sent to Reuters.

A chronology of medical reports showed confessions were obtained “in full consciousness and voluntarily, without any physical or verbal coercion”, he said.

Bahrain, which is led by a Sunni Muslim royal family but has a Shi’ite majority population, has been clamping down on dissent since 2011 when it quashed protests with Saudi help.

Home to the Middle East headquarters of the US Navy, the Gulf island kingdom has prosecuted and revoked the citizenship of hundreds of people in mass trials. Most opposition figures and human rights activists are jailed or have fled. 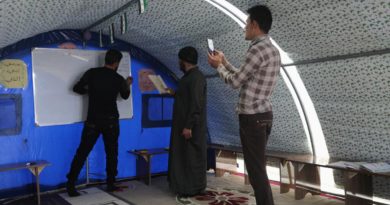 US constitution allows for socialists to be shot, claims Montana Republican