Sign up to our free morning US email news bulletin

Giving out the chilling details of the moments when a shooting unfolded inside a Walmart store in Chesapeake, eyewitnesses have said that suspect Andre Bing was “laughing” as he “started spraying” bullets in the break room.

Police have identified Mr Bing, the overnight team lead at the store, for killing six people in a mass shooting before turning the gun on himself, according to authorities.

Police were called to the store at around 10.12pm on Tuesday night to find multiple people dead and injured on the scene.

Six victims were killed in the attack and another four remained in hospital with injuries as of Wednesday morning.

Eyewitnesses have said the gunman had “issues” with other staff members and acted paranoid, saying the “government was watching”.

In a statement from police yesterday afternoon, five of the victims were named. A sixth is a minor and so his name was not released.

A motive for the shooting is unknown, but witnesses have said they believe it was planned and he specifically targeted coworkers.

Chesapeake Police have released the names of the adult victims of Tuesday night’s mass shooting at the local Walmart.

A sixth, 16-year-old minor has not been named.

What we know about alleged gunman in Chesapeake Walmart mass shooting

Andre Bing, a 31-year-old from Chesapeake, is accused of opening fire inside the break room of the store on Sam’s Circle at around 10pm on Tuesday, before turning the gun on himself.

At a press conference hours earlier, authorities confirmed that the gunman was a disgruntled male store employee.

“The alleged shooter has been identified as Andre Bing. We can confirm that he was a Walmart associate,” the Walmart statement read. “Andre’s position with the company was overnight team lead and he’s been employed with us since 2010.”

Chief Solesky said that officials would not reveal his identity at that time because his next of kin had not been notified.

He said that it was currently unclear whether or not the gunman “targeted” his victims or carried out the shooting at random. Prior to Tuesday’s attack, he is not believed to have been on the radar of police.

A search of online records appears to show that he had no criminal record.

One Walmart employee who survived the attack claimed that the gunman had “issues” with some of their other colleagues and was “laughing” as he opened fire on his victims.

A mother with wedding plans, a father and custodian: Families remember victims

A mother with wedding plans, a custodian with a congenital brain disorder, and a loving father. That’s how families and friends described the victims of the Walmart shooting

Kellie Pyle, 52, of Chesapeake, was remembered as a generous and kind person, a mother who had wedding plans in the near future, Gwendolyn Bowe Baker Spencer. “We love her,” said Ms Spencer.

“She was going to marry my son next year. She was an awesome, kind individual — yes she was.” Pyle had adult children in Kentucky who will be traveling to Virginia in the wake of the tragedy, Ms Spencer said.

Another victim, Brian Pendleton, 38, was born with a congenital brain disorder and made sure to be punctual. Although his shift as a custodian started at 10.30am, he was in the break room when the shooting started just after 10, according to his mother, Michelle Johnson.

“He always came to work early so he would be on time for work,” she told The Associated Press Wednesday. “He liked his coworkers.”

Pendleton had recently celebrated his 10-year anniversary working at the store.

The mother of Lorenzo Gamble, 43, of Chesapeake, said in a Facebook post: “Missing my baby right now, life is not same without my son.” “He just kept to himself and did his job,” Linda Gamble said. “He was the quiet one of the family.”

Another victim, Randy Blevins, was a longtime member of the store’s team that set prices and arranged merchandise, The New York Times reported.

Former co-worker Shaundrayia Reese, who said she worked at the store from around 2015 to 2018, spoke fondly of Blevins as “Mr Randy.”

She said the overnight crew at the store was “a family” and that employees relied on one another.

One of the young victims of the shooting was, Tyneka Johnson, 22, of Portsmouth A makeshift memorial to Johnson was placed in a grassy area outside the Walmart, with the words “Our Hearts are with you” and a basket of flowers.

Workers at a Walmart store in Chesapeake, Virginia, have recalled their harrowing experiences when their routine team meeting in the break room turned into a massacre, killing six people.

Jessie Wilczewski said her Tuesday night shift started normally but moments after it began she saw her team leader holding a gun to the forehead after shooting his coworkers.

She said she hid underneath a table but the gunman told her to come out and “just had the gun up to my forehead.”

“I got up real slow and I tried not to look at everybody on the ground … and I had to touch the door which was covered (in blood) and I walked out the double doors to where you can see the aisles of Walmart and … I just remember gripping my bag and thinking, ‘If he’s going to shoot me in the back, well he’s going to have to try really hard cause I’m running,’ and I booked it,” she said. “I booked it and I didn’t stop until I got to my car and then I had a meltdown.”

Another employee, Donya Prioleau, wrote on Facebook: “I just watched 3 of my coworkers/friends be killed in front of me,

“Andre killed them in cold blood … I cannot unsee what happened in that break room.”

President Joe Biden has urged “greater action” to combat the proliferation of firearms in the US after a gunman fatally shot six people inside a Walmart in Virginia on Tuesday night.

The violence marks the second high-profile mass shooting in the US within three days, after five people were fatally shot and more than a dozen others were injured inside a LGBT+ club in Colorado Springs.

Alex Woodward has the story.

But alongside sympathy for the victims, are two other emotions that bubble up and will not go away. And they are anger and outrage.

Lawmakers and America’s elected leaders reacted with condolences and angry calls for action after the second major mass shooting in a week took place in Virginia just days after a massacre at a Colorado LGBT bar.

The shooting provoked the same calls for gun violence prevention and efforts to resrict guns in American society that other similar tragedies have dredged up but with the muffled resignation of the current political reality of such legislation well on the mind.

The state’s Republican governor, Glenn Youngkin, wrote on Wednesday that he was heartbroken, but did not immediately offer any suggestions for action to tackle future mass killings.

‘A woman fainted and the woman next to her was screaming’

A former employee of the Walmart store, now a Lyft driver, arrived at the scene shortly after the shooting ended. She described what she saw to The Virginian-Pilot:

Janis Strausburg, 48, of Chesapeake, worked maintenance at Walmart until June but is now a Lyft driver. She was dropping someone off at the store shortly after the shooting ended.

She said the timing coincided with a shift change, during which a large group of staff would be meeting in the break room or in a back hallway area. The area is also where employees clock in and out, Strausburg said.

“I saw police dragging a body, they were doing CPR on him. A woman fainted and the woman next to her was screaming we need an ambulance,” she said. “Then I saw maybe five cops went in the store and they very quickly came out.”

Chesapeake Mayor: ‘We will share this burden together and be stronger for it’

Coronavirus: Trump warns ‘there will be a lot death’ this week and lashes out at ‘false rumours’ 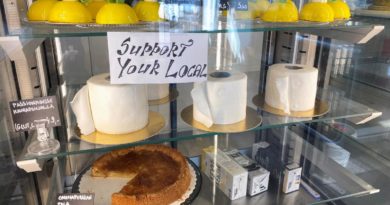