Activists in Seattle have condemned Donald Trump’s decision to send federal agents to the city, after dozens of demonstrators were arrested while protesting the president’s actions.

On Saturday more than 40 people were detained and two dozen police officers reportedly injured, after law enforcement broke up a large and largely peaceful protest in the city’s Capitol Hill neighbourhood. There were a number of clashes. Earlier, some protesters broke through a fence where a child detention centre was being built and set fire to a cabin. Police said they were also investigating “possible explosive” damage to the walls of one of its buildings.

Though the arrests were made by Seattle Police Department (SDP), demonstrators were protesting the dispatch to cities including Chicago, Portland and Seattle, of federal law enforcement officers.

Mr Trump has defended the presence of the federal officers in the largely Democratic-run cities, by claiming there had been a “shocking explosion of shootings, killings, murders and heinous crimes of violence”.

The move became increasingly controversial after it emerged unidentified federal agents had grabbed and detained protesters in Portland, Oregon, triggering fears about safety and accountability.

On Sunday, protesters in Seattle condemned the president’s decisions, denouncing them as the actions of “a fascist”. People said while the presence of the federal officers made them more wary, they were also determined to be present.

“Trump wants control,” said a man known as Dragon, who delivered an impassioned speech close to the police’s East Precinct building. “But he cannot control us. He is doing this to please his ego.”

One organiser, Nait, who has been a regular at the protests, said that because the federal law enforcement officers had not yet been used in Seattle – both the city’s mayor and the governor of the state have criticised their intended deployment – some may not yet have woken up to the implications.

A 22-year-old woman who asked not to to be named said that knowing the federal agents were in the city was making people adopt a low profile.

“But we’re also more determined than ever to stay here and protect each other,” she said.

Kristin Mowery said she felt driven to be part of the protest because “so much had gone wrong” in the country.

She said she sought to put herself in front of non-white protesters in the belief she would be less likely to be beaten or hit by police. “I am trying to weaponise my whiteness,” she said.

At the beginning of July, police cleared a protest site, established in the aftermath of the killing by Minneapolis police of George Floyd, which had occupied a half-dozen blocks in the Capitol Hill neighbourhood.

When they cleared the site, known variously as the CHOP and CHAZ, they detained dozens of protesters.

On Saturday, police declared a riot following large demonstrations in the same neighbourhood, and deployed stun grenades and pepper spray.

The Associated Press reported police as saying that rocks, bottles, fireworks and other missiles had been thrown at officers as they attempted to clear the area over the course of several hours.

Many protesters were also hurt, including a military veteran and a nurse.

Critics of Mr Trump have dismissed his deployment of federal forces to various cities as an attempt to revive his flagging re-election campaign.

The president said he had no choice.

“In recent weeks, there’s been a radical movement to defund, dismantle and dissolve our police departments. Extreme politicians have joined this anti-police crusade and relentlessly vilified our law enforcement heroes,” he said last week.

“To look at it from any standpoint, the effort to shut down policing in their own communities has led to a shocking explosion of shootings, killings, murders and heinous crimes of violence.”

On Sunday night Mr Trump engaged in a retweet spree, promoting messages from people who supported his tactics. 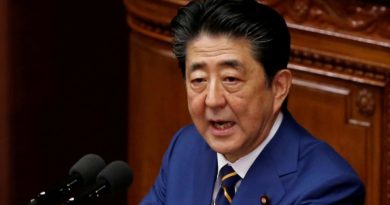 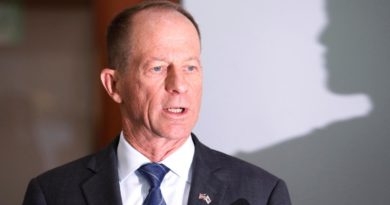 U.S. weighs options ‘across the spectrum’ to punish China over Hong Kong