Sign up to our free morning US email news bulletin

A woman has accused Mike Tyson of rape in a lawsuit filed in New York State earlier this week.

The alleged victim said that the attack took place sometime in the early 1990s after she met the heavyweight boxing champion at the Septembers club in Albany, records show by ABC show.

In the $5m lawsuit filed in Albany County Court on 5 January, she claims that the alleged assault in a limousine left her with “physical, psychological and emotional injur[ies.]

“My friend and I were hanging out with him and his limousine driver,” the woman wrote in an affidavit. “Tyson told us about a party and asked us to join him. My friend was going to drop off her car and Tyson said he would pick her up in the limousine.”

She alleged that Tyson started to kiss her and touch her after she got inside his limousine, even after she said refused his advances.

“I told him no several times and asked him to stop, but he continued to attack me,” she said. “He then pulled my pants off and violently raped me.”

The woman said she wished to remain anonymous because making her name public “would certainly pose a risk to me of further mental harm, harassment, ridicule or personal embarrassment.”

Tyson was previously convicted of rape in 1992 after assaulting beauty pageant contestant Desiree Washington in Indianapolis.

He served three years in prison. 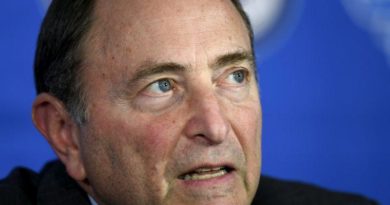 NHL: It’s not a race, Bettman says about resuming play amid coronavirus